Day three started pre-dawn for the drive to the Hsui Estuary and mangroves. I had been reading a book called Notebooks from New Guinea by Vojtech Novotny (Oxford University Press). Novotny is a Czech entomologist who has been running various research stations in PNG for many years and his book recounts some of the 'adventures' that he's had, mostly relating to mad acts of violence and criminality. It's an excellent read but when you are reading it, and hearing various similar stories from people you meet, the last thing you want to see when driving in the dark is a large group of men carrying what look like machine guns and blocking the road. Paranoia sets in very quickly! Fortunately the men were police and we were allowed on our way. The newspaper next day revealed that PNG's most wanted criminal was shot dead on that road not long after we passed through.

The paranoia continued throughout the trip and didn't just affect me. My brother was convinced that the grills on all the vehicle windscreens were there to prevent armed hold-ups rather than to stop flying stones breaking the glass!

Birding the mangroves as Hsui was like birding mangroves anywhere - bloody hard work. Eventually most of the target species were seen, albeit often briefly.

The open, sunny areas produced a range of interesting insects like this shieldbug 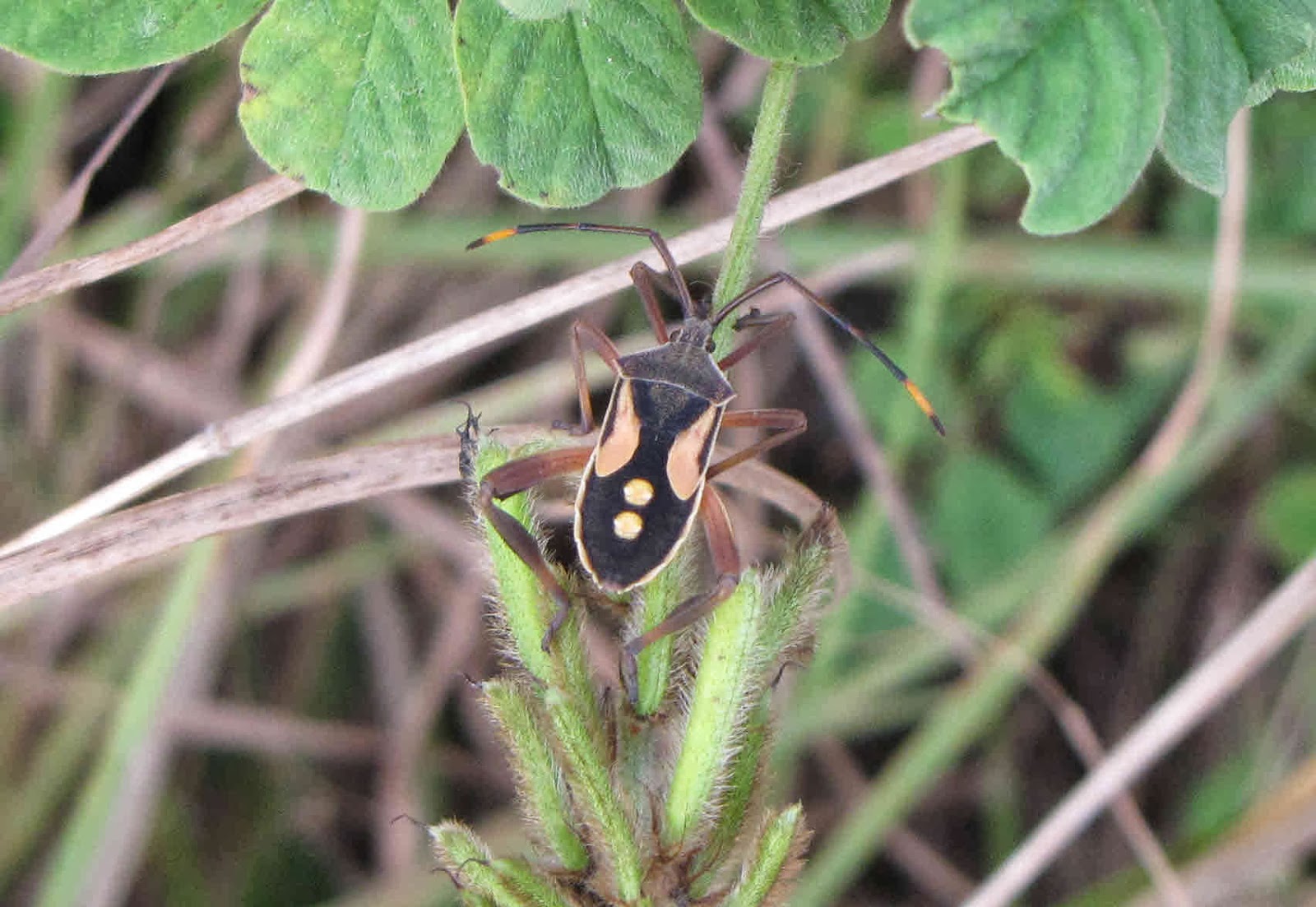 but our attention was soon diverted by Lesser Frigatebirds overhead. Some people claimed Great Frigatebird as well but we remained unconvinced. 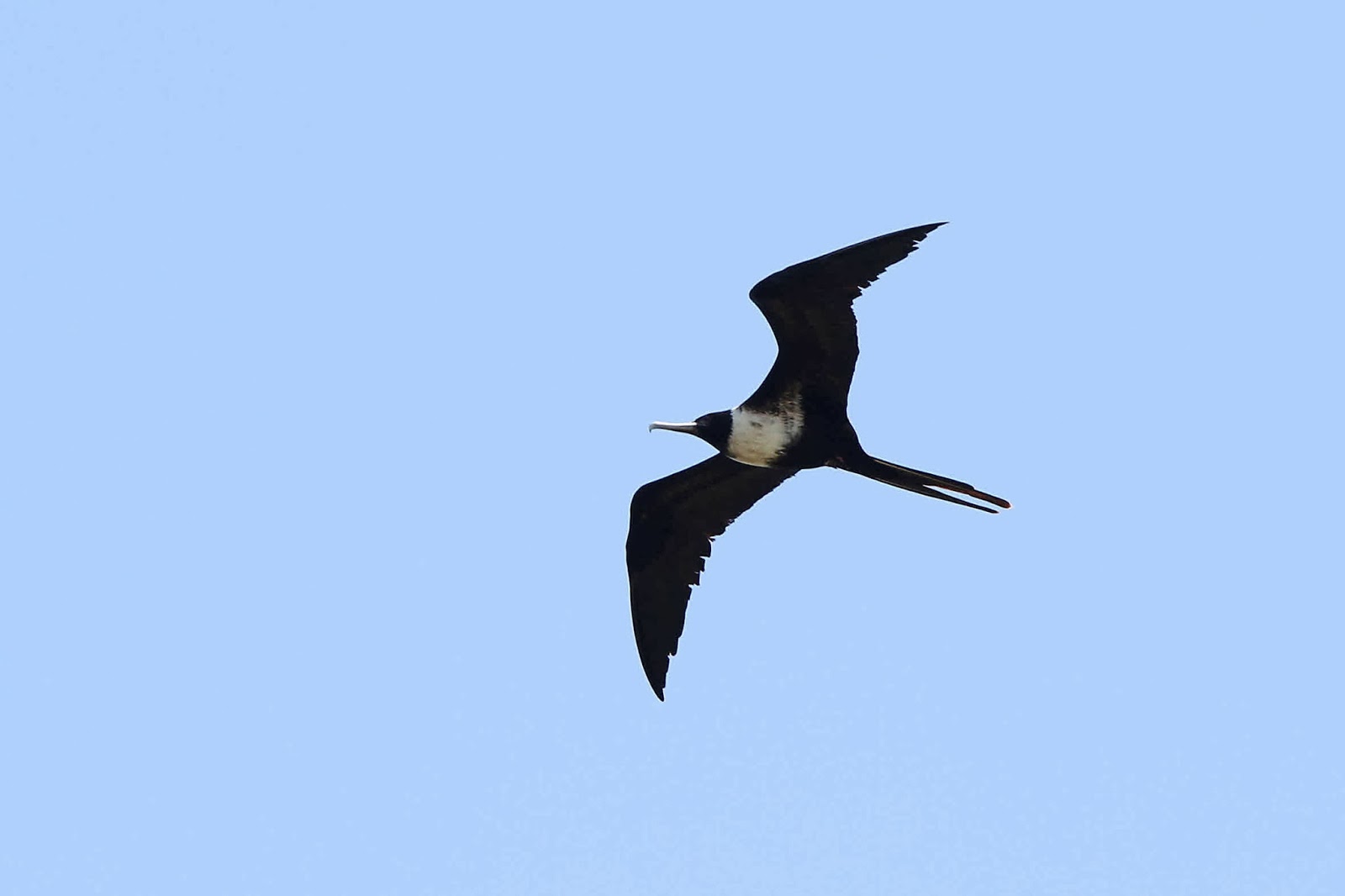 The highlight however was an amazing spot by one of our leaders; a Marbled Frogmouth on its nest several hundred yards up the road. 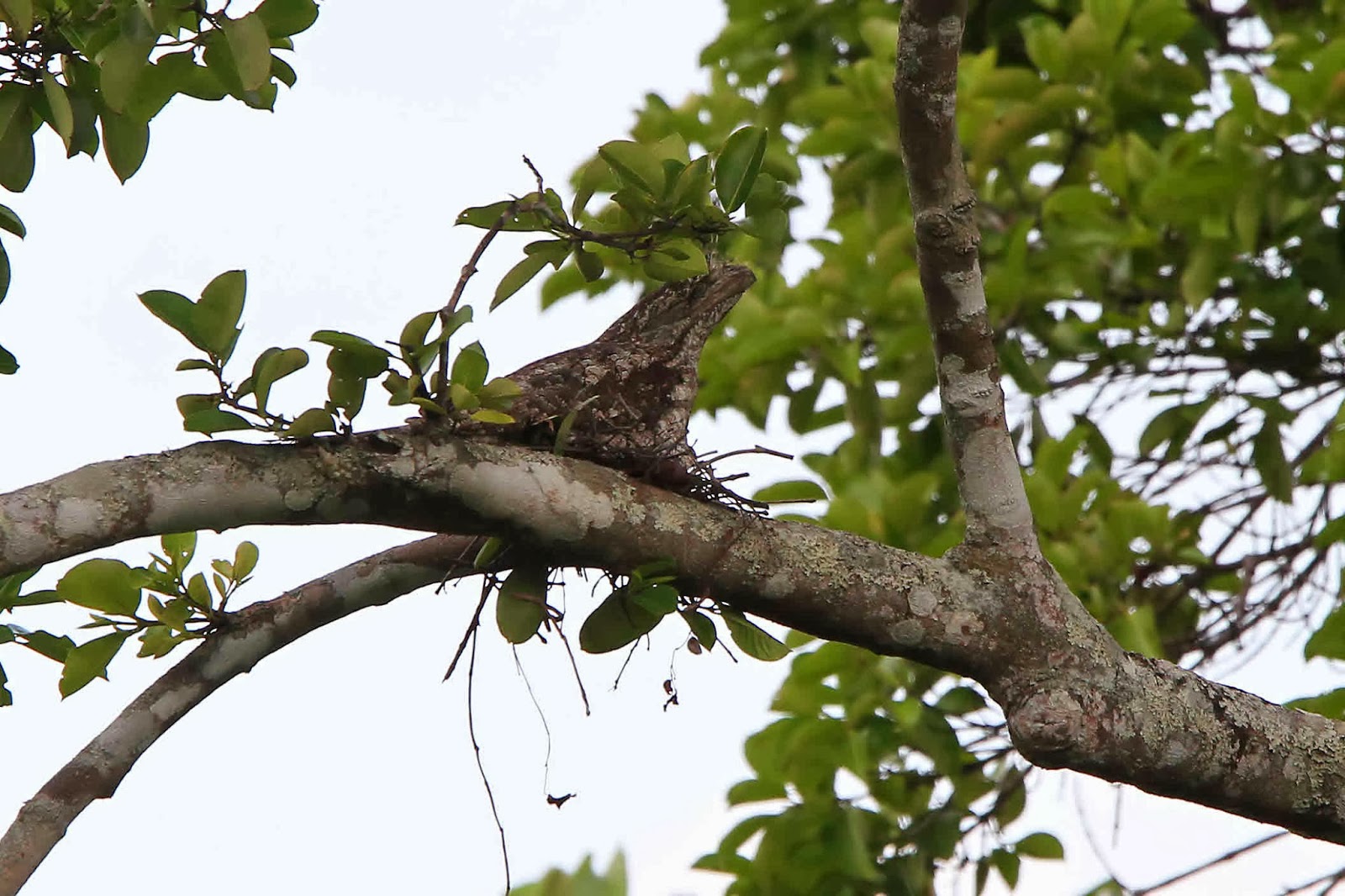 Another early start next morning, this time for a flight to Tari. The flight left and arrived on time; this is getting worrying. 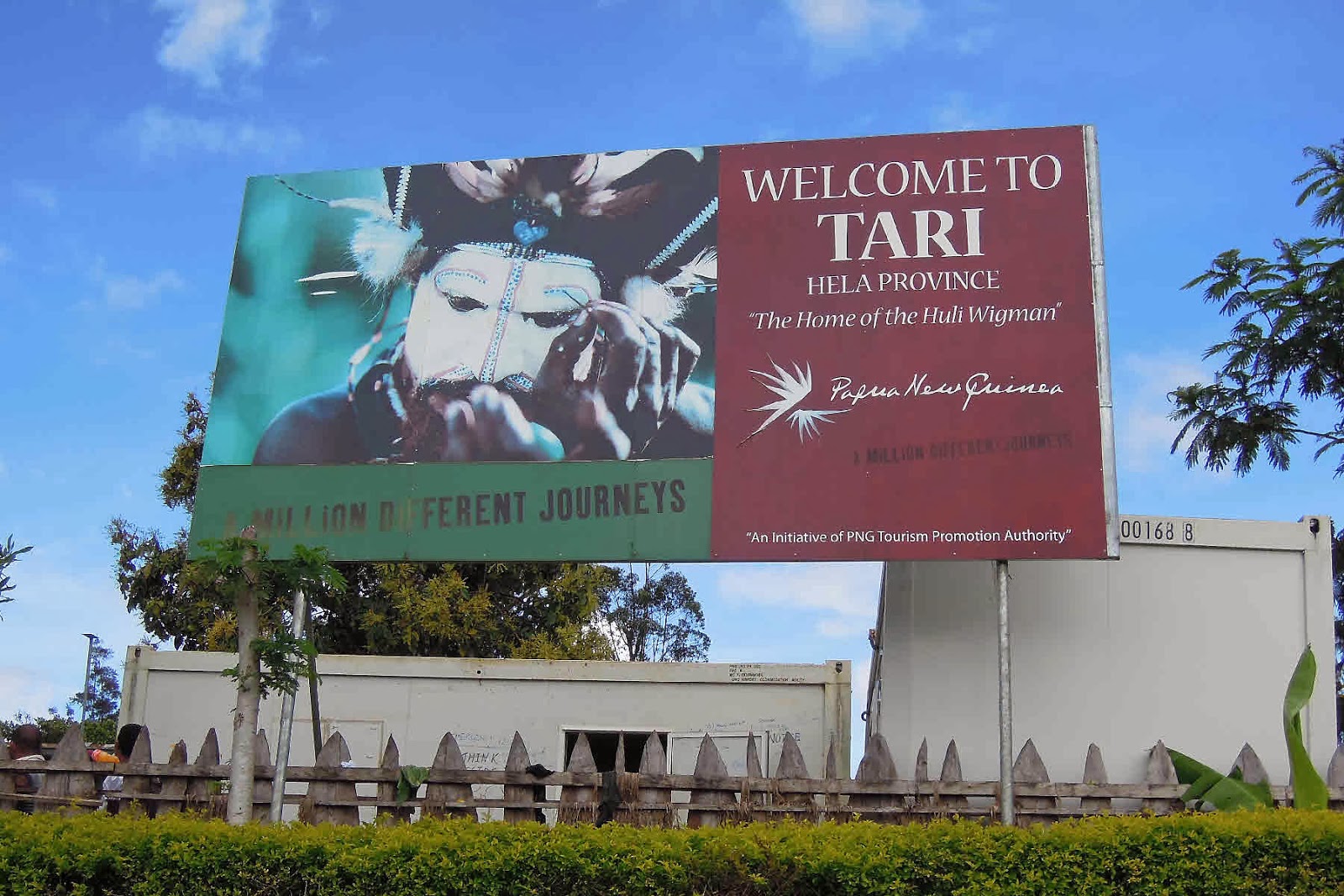 Upon arrival at the airport, it looked like news of my presence had got around 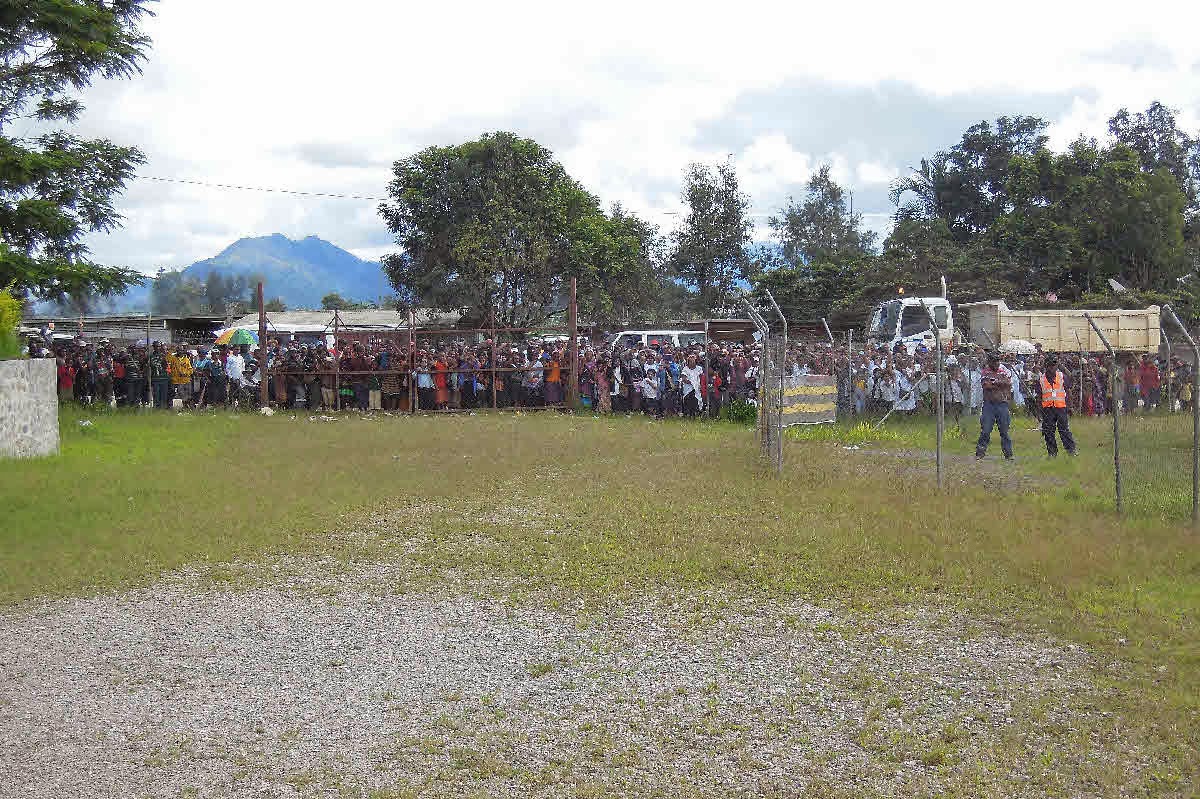 but it turned out they were all waiting for another VIP 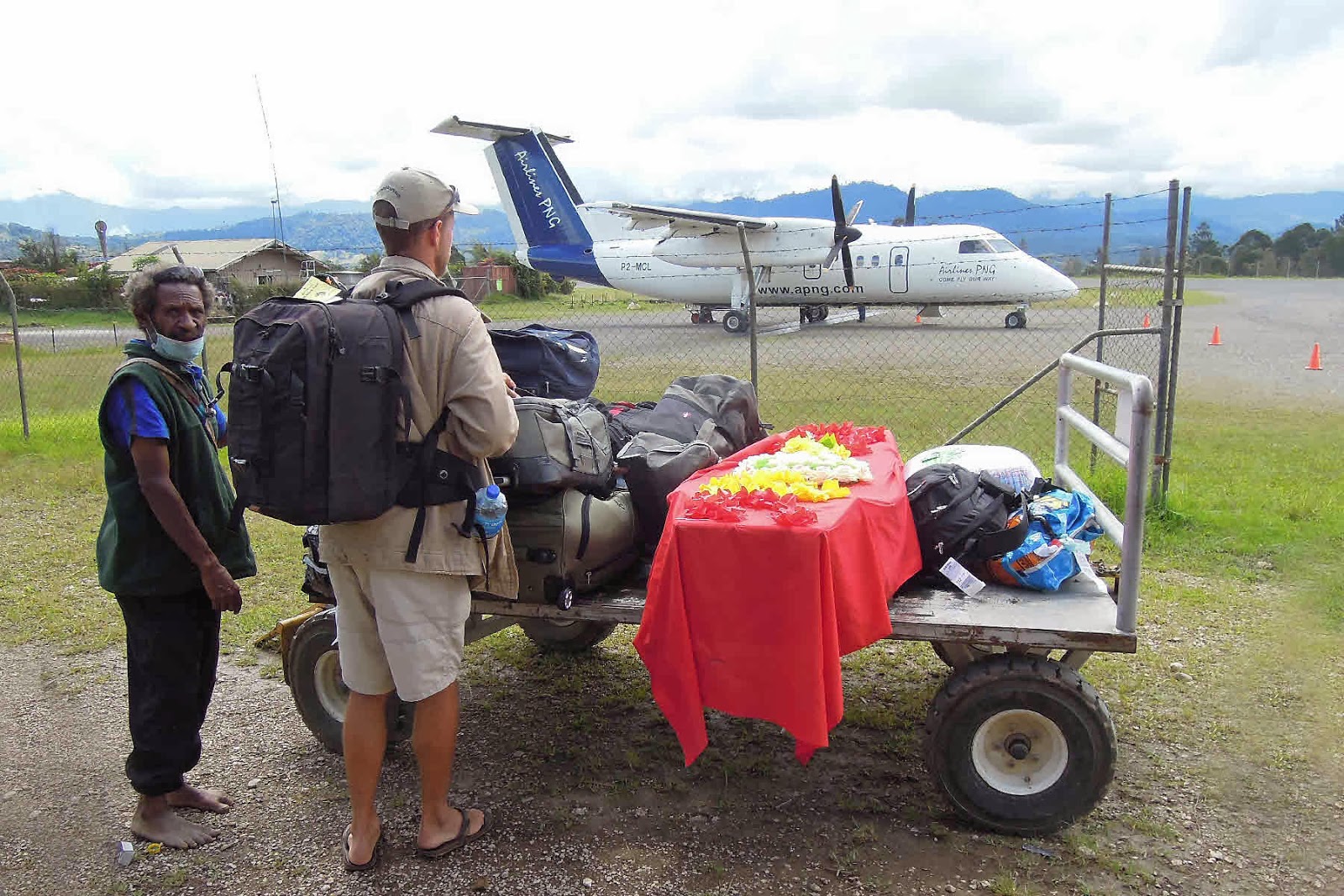 Our destination was the famous Ambua Lodge. Everyone raves about this place and from the price of a room, one would certainly expect it to be outstanding. I was not convinced however. I've stayed in plenty of places that were more scenically attractive, had better facilities, better food, etc. I guess they can get away with the outrageous fees because of the lack of competition. There is another lodge just up the road but it is almost as expensive and when our leaders checked it out it was horrendous, there was even a dead animal on top of the fridge! 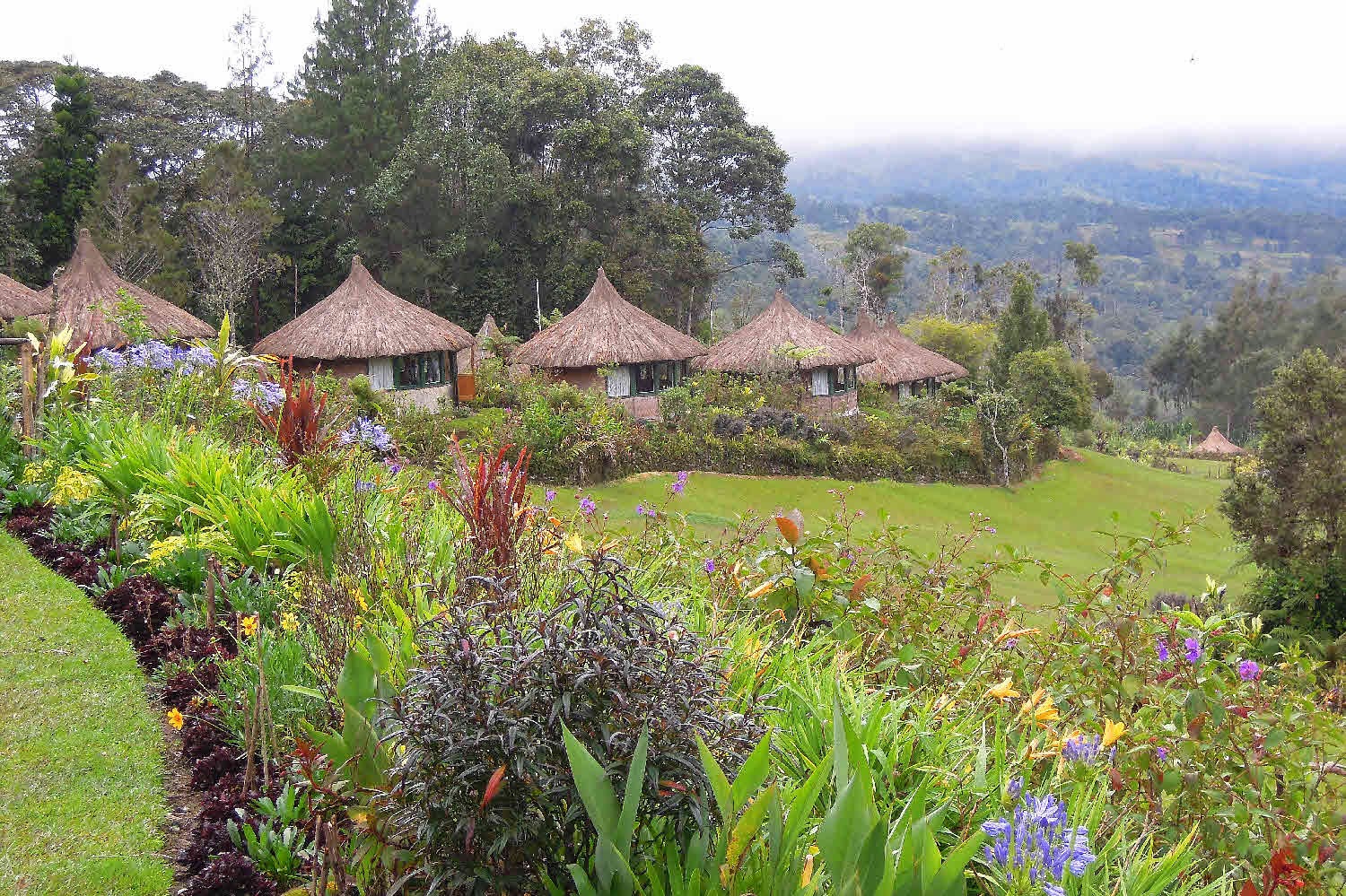 We were now in the uplands so it was raining. We spent the afternoon birding around the huts.

Wanna see a BoP? Part one

Anyway, at long last here are some of my holiday snaps (although most of them were actually taken by my brother). 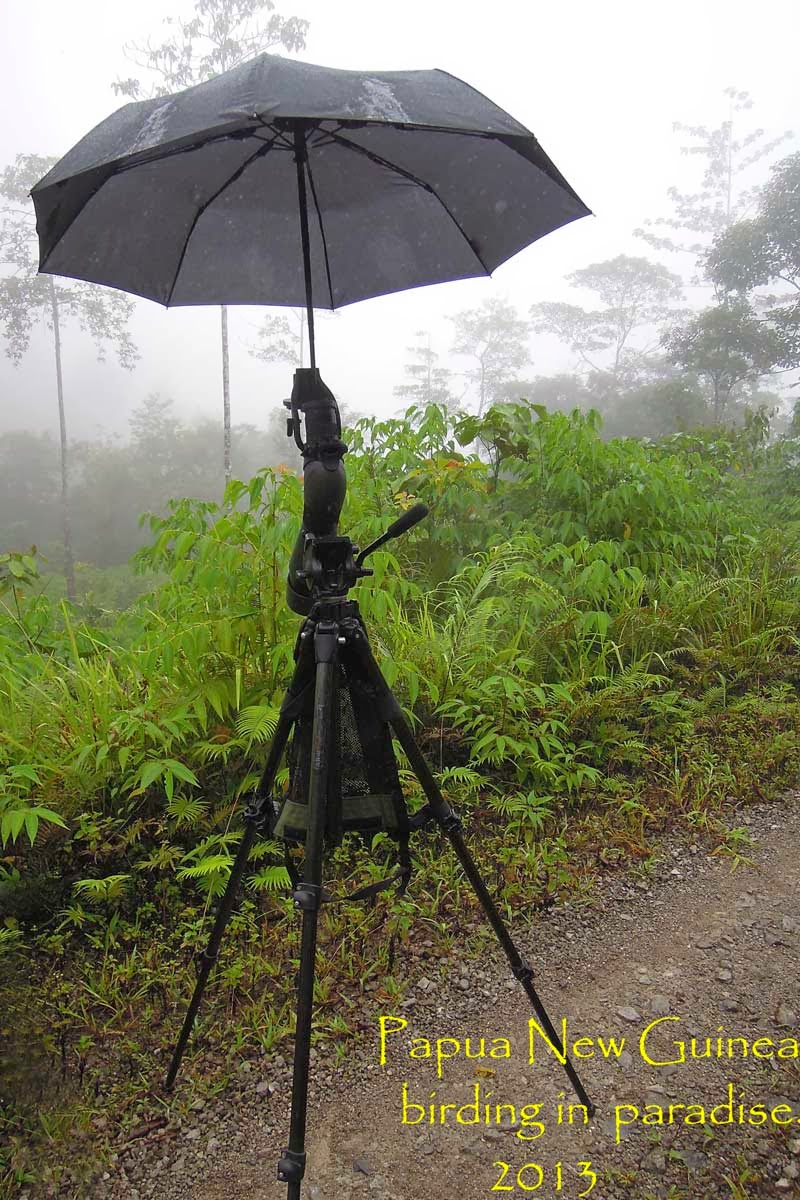 Among naturalists, or perhaps that should be birders, PNG has a mythical status. Perhaps it's the Birds of Paradise, perhaps it's the difficulty of getting there or perhaps it's the sheer expense of a trip there (which means that few can afford it - or are stupid enough to pay that much) but whatever it is, PNG comes near the top of most birders 'would love to visit list'.

The approach of a significant birthday for my brother, combined with a significant rush of blood to the head for both of us, meant that we booked a trip with Rockjumper in late summer 2013. The trip there was surprisingly uneventful apart from the food poisoning that I got from a dodgy omelette at Heathrow! We flew with Swiss to Singapore via Geneva where the monorail through the airport had 'entertainment' in the form of various Swiss sounds - all rather mundane until it was suddenly punctuated by the sound of mooing cows. All rather surreal. From Singapore it was on to Port Moresby with Air Nuigini, the fact that we arrived without incident became more and more surprising as the trip went along......

I'm nowhere near as well travelled as many people but PNG (which is in Australasia) was my final continent and I reckon I know what to expect when travelling in developing countries. PNG is different! The first clue came a couple of hours after we arrived when the bus failed to turn up to take us for an afternoons birding at the university campus. Investigations by our leaders revealed that two days previously, our driver had been held up at gunpoint and was now a gibbering wreck at home in bed. Alternative arrangements were quickly made and we arrived at the university just a little later than planned.

As is always the case on your first day in a new continent, things were a bit manic but we saw a number of species that we would not see again on the trip such as Nankeen Night-heron 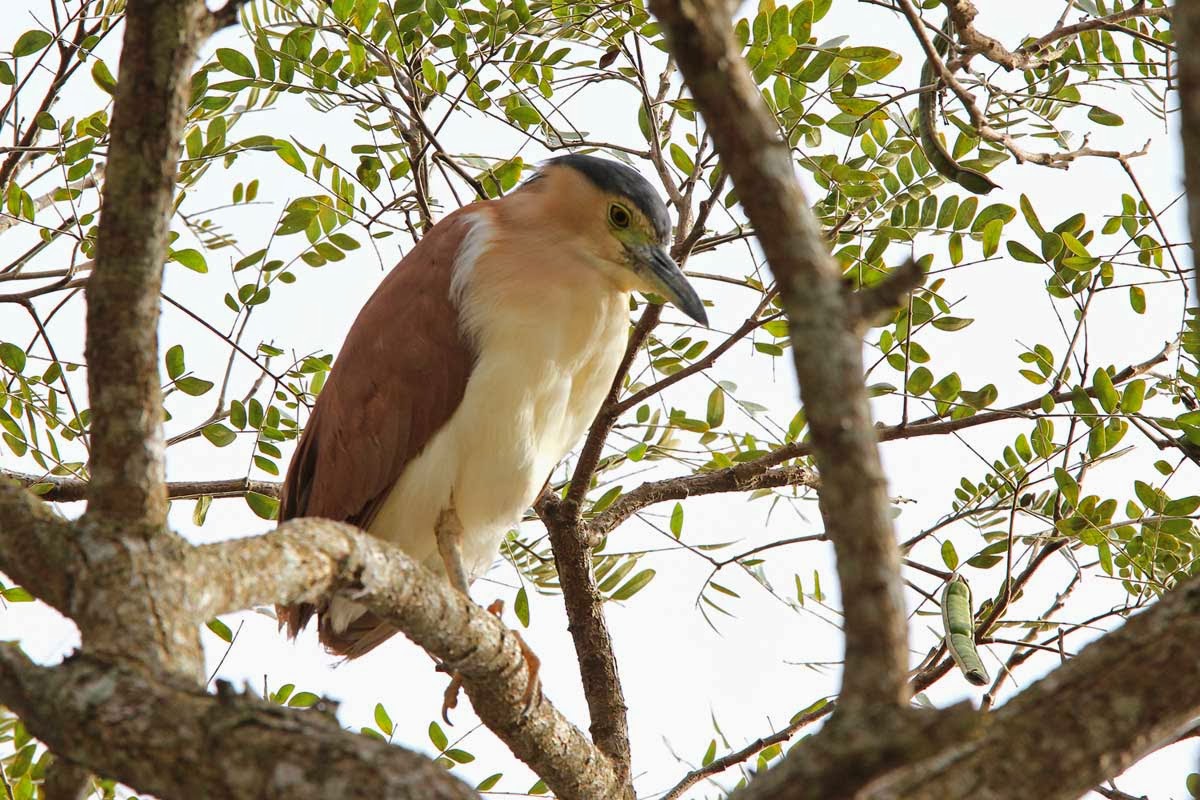 and my first ever Kookaburra; Blue-winged. 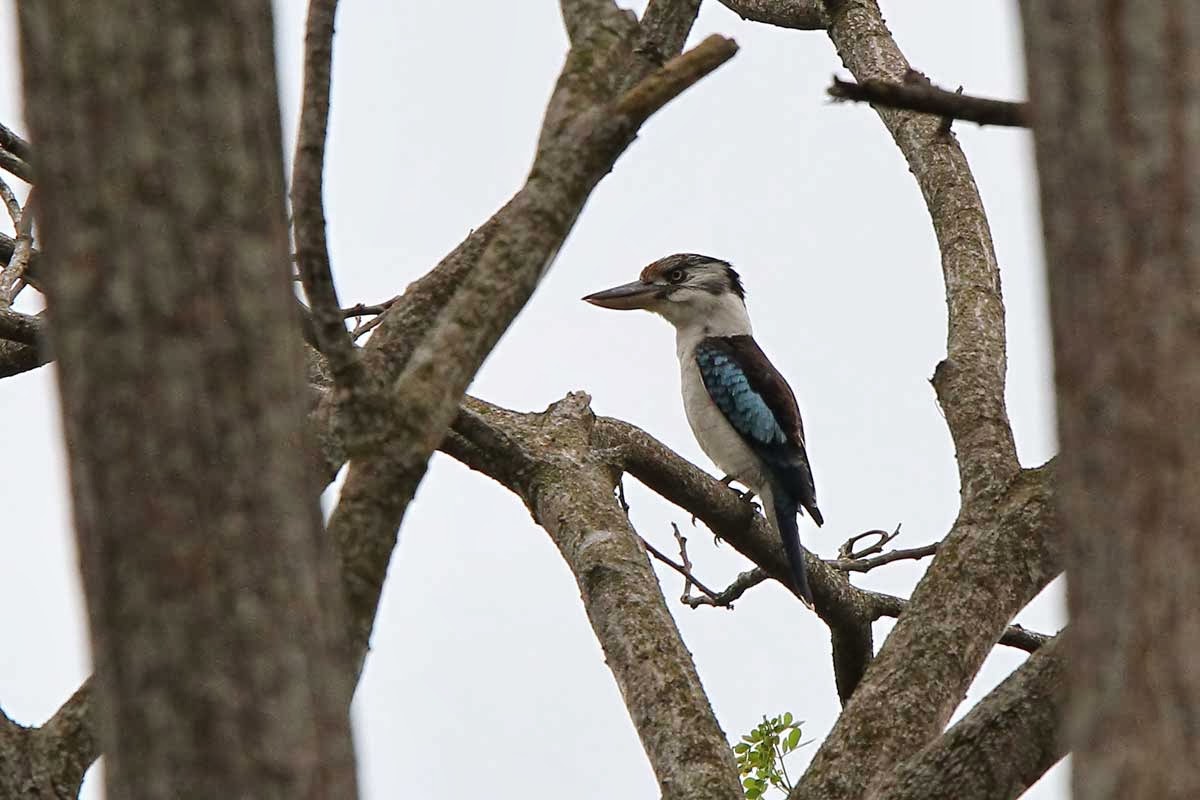 The main target at this site looked like it was going to evade us though. It was known to roost in a particular set of trees but there had been disturbance in the area recently and on their last visit our leaders hadn't seen it. There was no sign of it in its usual tree and I had pretty much given up hope when one of the group members picked up on it nearby.

What a bizarre and outrageous bird, and a great end to our first day. Next morning saw an early start to arrive at Varirata National Park at dawn (via a seriously dodgy entrance road which at one point had me thinking that the bus was going to topple into this river). 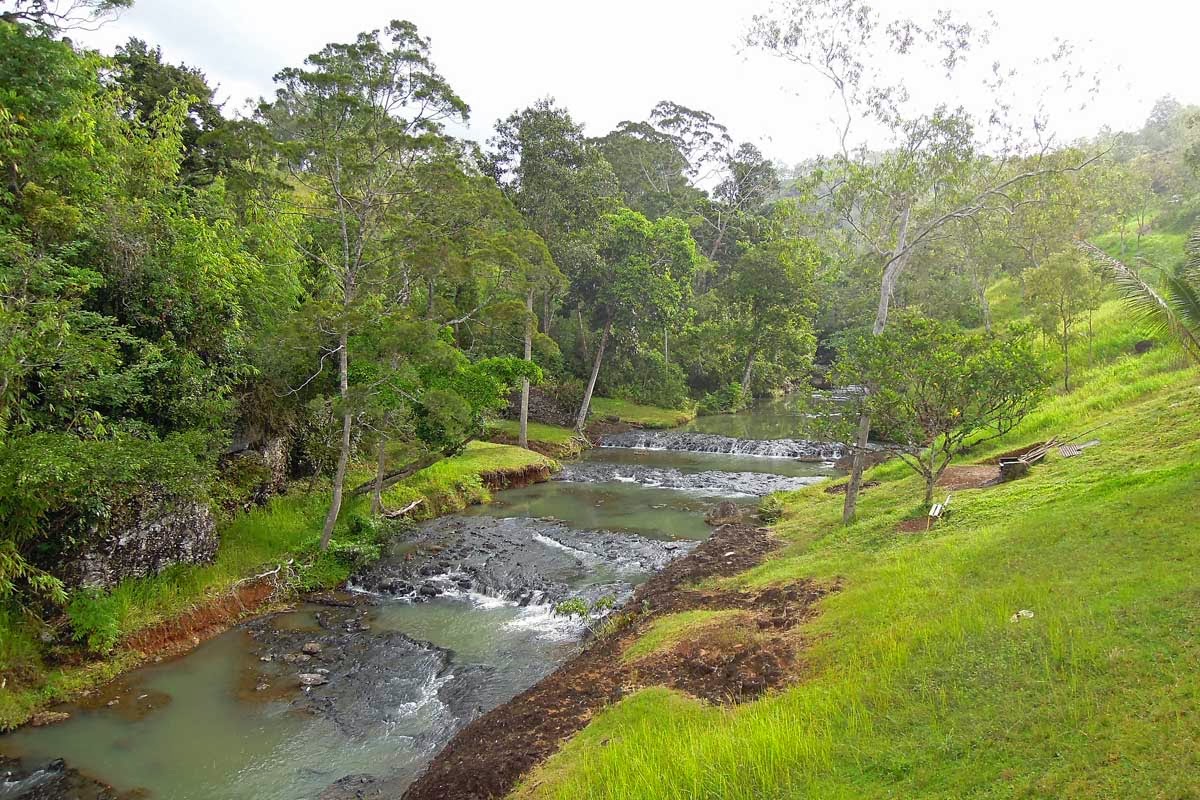 Most of the morning was spent birding from the picnic area 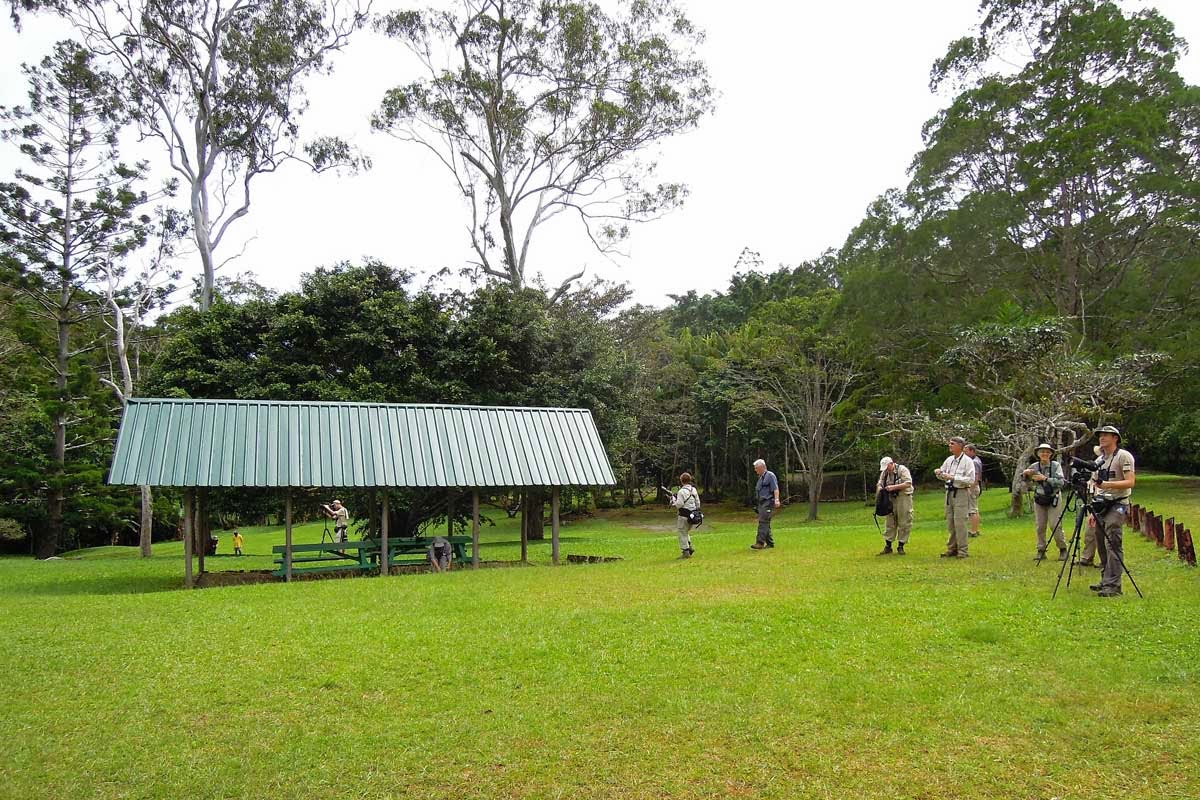 where fruiting trees attracted a procession of stunning fruit-doves and a good range of other birds.

Not everything in PNG is stunning to look at.

Although even some of the crows are bizarre.

After several hours productive birding we drove a short distance to the view point from which we would walk a forest trail back to the picnic area. The view across to Port Moresby was deserving of more superlatives. 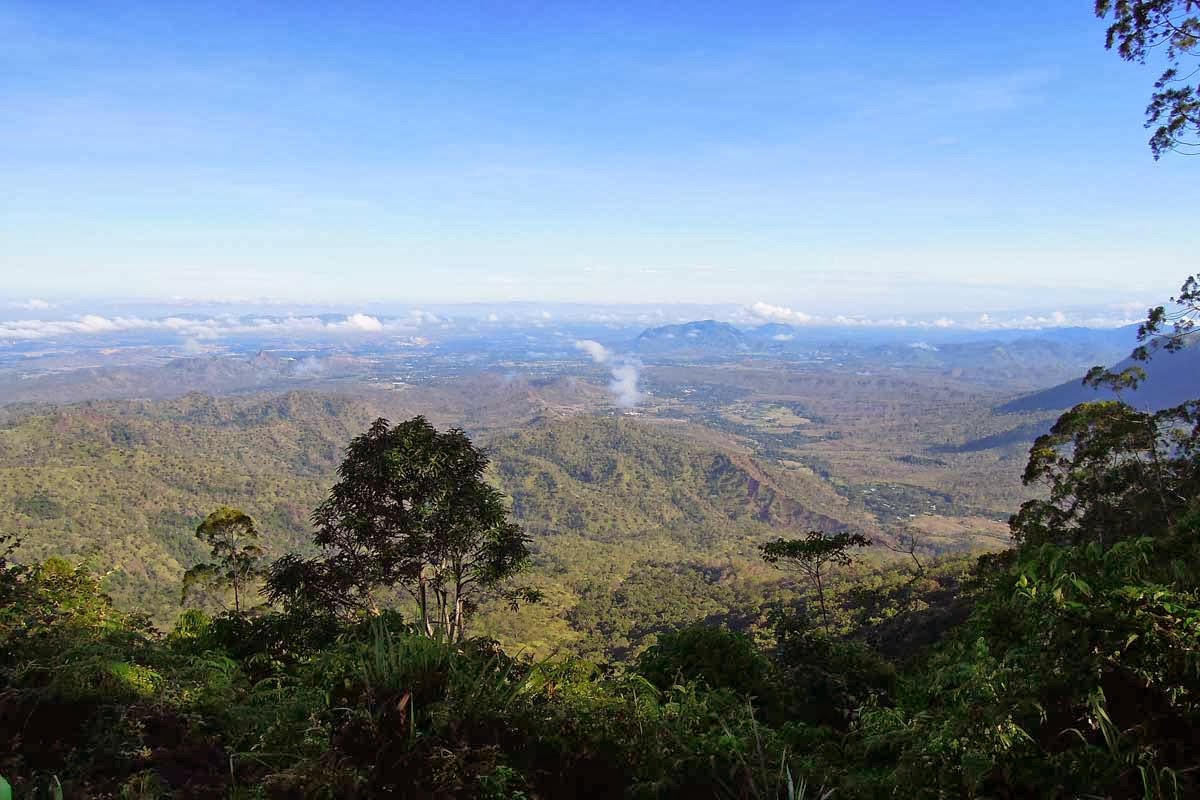 Forest birding in the tropics is always hard work and kingfishers in PNG seemed to be particularly tricky but were well worth the effort.

A staked-out Barred Owlet-Nightjar was a new family for most of us and ticking families became something of a theme for the trip as several members of the group are trying to see one species from every bird family in the world. To me this is one of the most meaningless forms of twitching I've ever heard of, but each to their own I guess. 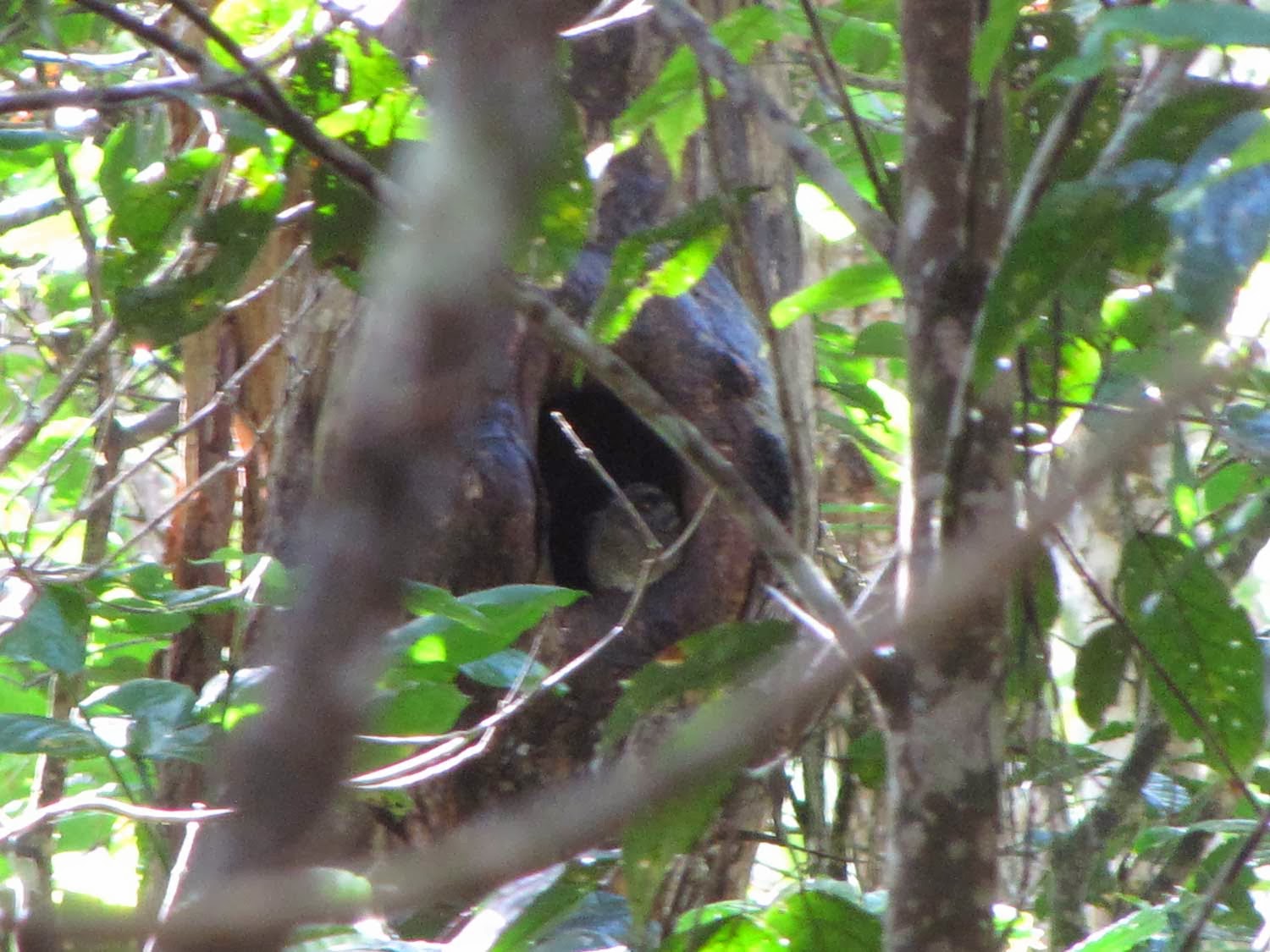 A family which repeatedly surprised me during the trip was the robins; cracking little birds without exception.

On the TV the other night, I heard actor / comedian Alan Davies saying that life was all about little victories. When asked to explain what he meant, he recounted a story about being in bed with his baby on his chest when he heard a noise indicating that it was about to vomit. He was able to roll to the side and avoid being covered in sick - little victory.

Now fortunately I have never come close to being in this position and I don't intend changing that situation, but I guess that most natural history is about little victories. I've known the call made by Hawfinches for several year but there's a lot of difference between knowing something and having it really ingrained in your brain. As an example, I tend to pick up on the song or call of Wood Warblers long before other birders but I have never heard a Lesser Spotted Woodpecker in three years of studying Wood Warblers, except once - when I was joined by an RSPB researcher who had studied Lesser Spots and she picked up on one within an hour!

Back to Hawfinches. As I say, I know the call but on several occasions last summer I found myself sitting somewhere and realising after about 10 minutes that there had been a Hawfinch calling above my head all along. This morning I was driving slowly through the New Forest on my way to survey Hawfinches. I had the window open and the radio on as I approached Millyford Bridge when I heard a tic call - like Robin alarm call but more metallic and more abruptly ended - Hawfinch! Now I know it's a small victory, and I really shouldn't be as chuffed as I am, but it's a victory nevertheless. Now if I can just find a Lesser Spot. 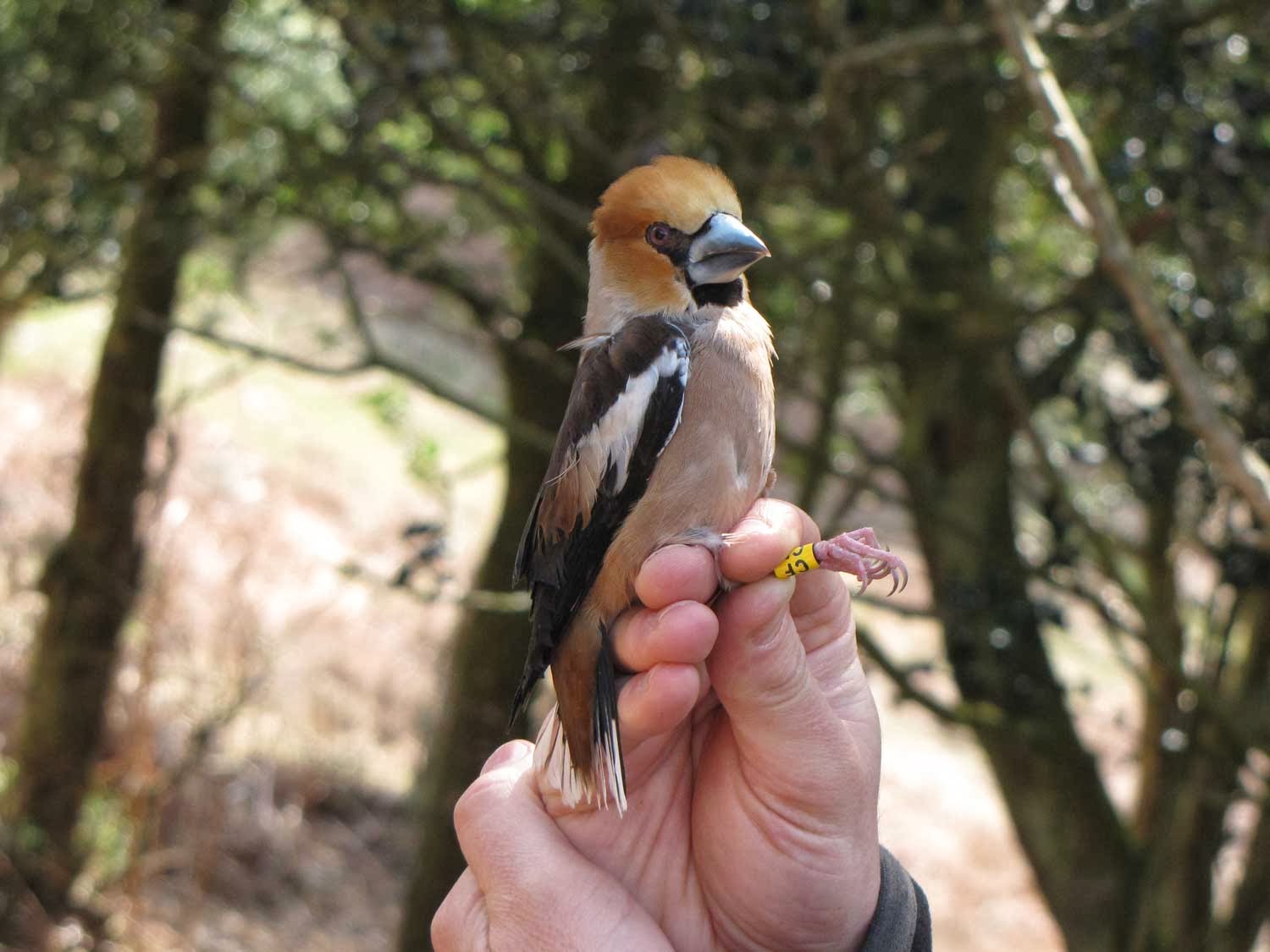