One of my favourite wildlife blogs (albeit almost as quiet as this one in recent times) is The Lyons Den, written by a Sussex ecologist. Today we entered Lyon country in the hope of catching up with one of the Sussex-bred Long-tailed Blues that has been emerging recently. I tried several times during the last Long-tailed Blue invasion but my only reward was a 'probable' at a range of about 20 metres that flew off, never to be seen again. During the last invasion I spent a lot of time staring at Broad-leaved Everlasting-pea at the derelict Shoreham cement works so I was rather dismayed to be told by my local contact that this was the best place to try this time. A sense of deja vu quickly descended as the only butterflies to be seen were a couple of Speckled Wood. My contact was racing around various sites where he had seen the butterfly but was having a similar level of success.

Just when it all seemed futile, a message came through saying 'get yourself to Southwick Basin asap'. My contact had not only found one but he kept his shadow over it so that it didn't fly off before we got there. 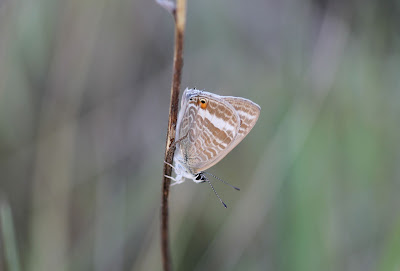 Once the sun was allowed to fall on the butterfly, it opened its wings for a couple of minutes before flying and vanishing into thin air. 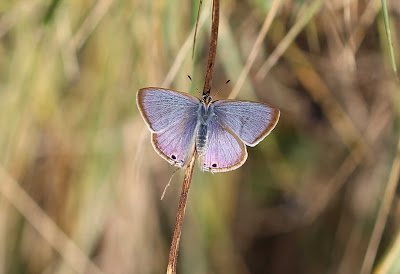 So a huge debt of thanks is owed to this person, not only for finding the butterfly but for having the presence of mind to keep it shaded long enough for us to see it.
Posted by Gilbert White's Ghost at 22:27 1 comment:

A bunch of useless twonks

It's been a while since my last rant and my reader is keen that I have a go about this so.......

Back in 2013 I found the ichneumon wasp Lymantrichneumon disparis new to Britain. It was found on an RSPB reserve and they were keen to issue a press release about the find but I insisted that nothing was done before the discovery was properly published in a relevant journal. This took some time but the paper was eventually published a couple of months ago so I gave the RSPB the go-ahead to do the press release. They consulted me on the draft and I made a few changes so that it was factually correct. I put up with the cheesy quote attributed to me, even though it bore no relation to anything that I did or would say. It seems that all press releases have to have some sort of naff quote of this sort.

Neither I nor the RSPB expected the press release to be picked up by more than the odd local newspaper but it must have been a slow news week as it was used by at least 13 local and regional newspapers, plus two nationals; the Guardian and Express. I haven't looked at the local coverage but did look at the two nationals. Both reproduced the press release almost word for word but added little bits. The Guardian added that the site it was found at was in Kent (wrong) and that I am a butterfly collector (Seriously? What in the press release gave you that idea? Look at who I work for you ignorant prat). The Express went a little bit further and their accompanying pictures and captions are just so hysterical that it is worth having a look. I will of course now be carrying out all fieldwork wearing a 1950's suit and will start hunting for rare butterflies over the sea.

I suppose I shouldn't have expected any better as the standard of the British media is so awful these days but when the topic is something so innocuous, with no political connotations that certain sections of the media would want to put their right- or left-wing slant on, one has to question how they can make such a mess of the article. This isn't just an isolated incident as I see it every time I have any involvement with a press release.

So, one has to pose a question. What is the point of journalists? If they had just copied and pasted the press release it would have been accurate and would have conveyed to the readers all the information that was in the final article. All that the journalist has added is some nonsense about me collecting butterflies - despite the fact that the press release says that I was undertaking moth monitoring (of larvae as it happens) and that I was working for Butterfly Conservation. How did they take those pieces of information and come up with the claim that I was a butterfly collector? Presumably they had to read the press release so the only conclusion is that they have such a poor understanding of the subject that the words 'butterfly' and 'net' have only one meaning.

I cannot think of another profession (apart from politician) where such a level of incompetence would be tolerated.
Posted by Gilbert White's Ghost at 22:05 4 comments:

I've never really been very interested in Orthoptera. It's a small group so theoretically not much of a challenge but the identification criteria for a lot of species always seem to be a bit vague and comparative. This is all well and good when you're familiar with them but not much help to a beginner. Even the 'experts' seem to struggle with some species, I have a couple of cockroach specimens which are either Tawny or Dusky but I've shown them to various people and no-one has been able to definitively identify them.

Despite this I have managed to pick off most of the common species over the years, but Stripe-winged Grasshopper had eluded me. The opportunity of a meeting near Dorking on a warm, sunny day encouraged me to pay a visit to Box Hill. The grasshopper was very easy to find (although not a very cooperative photographic subject) but there was little else of interest on the slopes.

Back at the Zigzag car park I noticed a couple of groups of an unfamiliar plant. It really should have been easy to identify as the leaf-shape was very distinctive but the flower wasn't right. Eventually it was resolved as Buckwheat but I maintain that the picture in the Collins guide is very unhelpful. Buckwheat is a member of the sorrel family and they illustrate very sorrel-like flowers, not at all like this:

A quick stop in at Chiddingfold Forest produced little of note apart from the larval case of the moth Coleophora discordella on Common Bird's-foot Trefoil. This is not a rare species but I've only found it in the larval stage on a couple of occasions.

There has been news recently from Dungeness of two very unusual Orthopterans. The Sickle-bearing Bush-cricket which was resident for a while at Hastings and the Italian Tree Cricket which has not previously been recorded breeding in Britain as far as I know. I had a couple of work related things to do in Kent so an evening visit to Dungeness seemed in order. I had fairly detailed info on where to look for the Italian Tree Crickets but the best chance of them was when they start singing at dusk. I did have a grid reference for the Sickle-bearers but it was worked out from aerial photo's rather than being taken at the time. I spent some time looking for these without success, a couple of hoppers and an interesting looking beetle may be new for me when I get them identified but the only new species for me by dusk was New Zealand Spinach - a plant so boring I am not going to post a photo.

As dusk fell the Italian Tree Crickets started to sing. It was really rather bizarre to be standing at Dungeness in a cold wind, listening to noises that would not be out of place in the tropics. There were a good couple of dozens crickets singing but actually seeing one was proving to be rather difficult as most were hidden deep in brambles. I did get one brief view but the photo's that I took were all horribly out of focus. At this point the warden of Dungeness Bird Observatory arrived and he kindly took me to see the Sickle-bearing Bush-crickets (well, cricket singular while I was there). It turned out that the grid reference I'd been given was a good 100m+ out.

I returned to the tree cricket area and eventually they became more cooperative (or I became better at finding them).

Also of Orthopteran note was a mating pair of Lesser Cockroach.

Posted by Gilbert White's Ghost at 22:24 No comments: