Gilbert has been a bit quiet about the fly / beetle challenge of late but what can I say? Rubbish weather followed by lockdown in a crappy urban environment means there really hasn't been anything worth mentioning. On the few occasions that I've managed to get to any decent habitat, flies seem to have been really thin on the ground. Maybe it's normal for this time of year and I don't usually notice because the weather is sufficiently poor to discourage me from doing any fieldwork.

Anyway, within a reasonable walking distance of my house is a 'park' with loads of mown grass and far too many people and a wood which I've never been to because from the outside it looks like a horribly dark, dull conifer plantation. I did try going there once and it isn't quite as bad as that but it was crawling with people so I haven't been back. In desperation I thought I'd try the burial ground at the top of the high street. It's basically a churchyard without a church and sometimes churchyards can be quite interesting so it was worth a look. 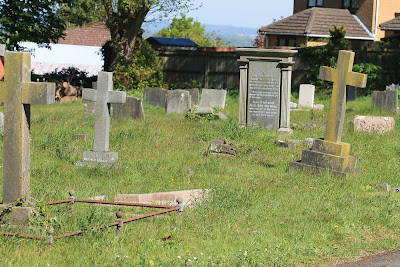 A notice board at the entrance explains that part of the site is mown in early spring and part in the autumn and only a small area mown regularly so that seemed quite promising and there was quite a diverse sward, probably mostly originating from planting but still better than nothing.

One of the first things I noticed was lots of Ox-eye Daisy so I had a quick look for the moth Bucculatrix nigricomella. No sign of that but lots of fly mines. The pupae were in the mine so I brought a few back to breed the adult fly. A check of the UK Fly Mines web site suggested that it was most likely to be one of the common species pair Chromatomyia horticola / C. syngenesiae which need dissection of the male fly to identify. There was a possibility that it might be C. paraciliata but there wasn't much information about that anywhere on the web.

A few days later a male and a female had emerged from the mines so I sent the male to the national recording scheme organiser for dissection. It turns out it didn't need dissection as it wasn't one of the common species pair but I'd never have identified it myself anyway as paraciliata isn't in the Agromyzidae key, having been described new to science in 1985. Barry identified the specimen and emailed me within a few hours of receiving it. He tells me that there are less than half a dozen records in the national database and all are from the original finder so I might be only the second person to find this species in Britain. Abroad it is known from mainland Spain and has recently been identified from Italy by Barry.

Maybe urban recording isn't as pointless as I feared.
Posted by Gilbert White's Ghost at 22:02