A pleasant surprise late last night when a friend sent me this photo taken by Peter Shappen. 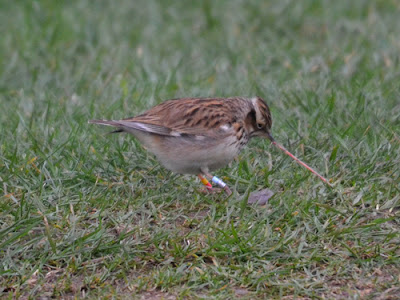 There's a couple of interesting things about this photo. Firstly, I've never seen a Woodlark eating a worm before, perhaps the cold weather is forcing them to take whatever they can find. Secondly and more importantly, it's one of my colour ringed birds.

Very little is known about where our Woodlarks go in winter. The Migration Atlas refers to birds from the Brecks moving to the south coast (and one across to the Netherlands) but suggests that the Brecks population may be more migratory than populations further south. I've colour ringed over 400 birds and this is the first to be reported away from the Thames Basin heaths. It was photographed on the golf course at Wick, on the edge of Christchurch Harbour in Dorset and was ringed as a nestling on one of the Surrey commons near Hindhead in April 2012. It was with 8 other Woodlarks, none of which were ringed.

Cold weather movements of Woodlarks to the south coast have been known about for many years. John Walpole-Bond in A History of Sussex Birds (published in 1938) documents this; 'Should the weather now become severe, we look for the Wood-Lark along and near the littoral ..... during the first week of January, 1867, a time when the elements were inordinately cruel, ..... as many as two thousand were seen in one day'. They did not leave the area and 'consequently they suffered the more at the hands of such vandals as bird-catchers and stray gunmen ..... on January 3rd a netter caught ten dozen specimens at Eastbourne. On or about the same day, between Brighton and Rottingdean, at least a hundred and fifty clap-nets were plying their horrid trade..... one rascal had forty live birds to his (dis)credit, another perhaps rather less loathsome villain is said to have slaughtered a hundred'.

Thankfully these days are long gone. Where such large numbers of Woodlarks came from was never known and little information has accumulated since so it is nice to add one very small piece to the jigsaw.
Posted by Gilbert White's Ghost at 22:41 No comments:

Needed to get out and see some wildlife and there seems to be so little about anywhere at the moment so I thought I'd have another look for the Pallas's Warbler on the Hants / Berks border near Eversley. I arrived in light snow to find 15 or so birders looking aimlessly in the wrong direction so wandered along the river and almost immediately a small bird with a bright lemon rump flew from my side of the river to the opposite bank and started feeding a few inches above the river, working it's way along the bank. I called the birders over and everyone got good views but no-one bothered to say thank you! This scenario was repeated a couple of times over the next 2 hours so when I again refound the bird, preening a few feet away I thought 'sod the lot of them' and I kept quiet and just watched the bird on my own. This worked out very well and the bird eventually came and fed less than 2 metres from me on the bank. 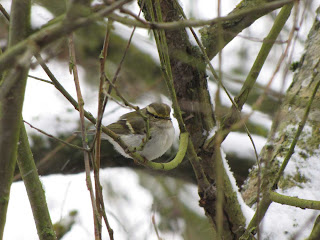 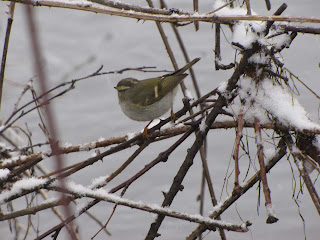 Various other species were working the bank of the river and assorted flood debris, searching for food. Most were things that you would expect; Robin, Dunnock, Wren, Grey Wagtail, Goldcrest, Long-tailed Tit, etc. but the sight of a Meadow Pipit scrabbling about on the bank under brambles just a few feet away showed how tough things are.

So why the post title? Well the last time I saw a Pallas's Warbler in the snow was in Nepal and the open-sewer smell of the River Blackwater was reminiscent of a certain wall in Pokhara that I spent a 'pleasant' hour crouched behind, suffering the effects of Giardia. I'll spare you the details.

Posted by Gilbert White's Ghost at 20:47 No comments:

On Sunday I called in at Moor Green Lakes on the Hants/Berks border to look for the Yellow-browed Warbler that had transformed into a Pallas's! Despite hearing it call on the other side of the river, I never got acceptable views. I did see a few new birds for the year such as Egyptian Goose and Red Kite (neither of which would have been likely when I lived in the area up to 10 years ago) but highlight of the day was an incredibly tame Field Vole which sat out in the open feeding for about 10 minutes, completely oblivious to a bunch of hairy birders standing 2 metres away taking photo's. Thanks to my brother for the photo (forgot my camera as usual). 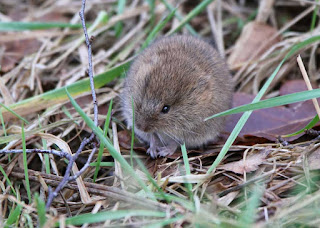 In the evening I had Countryfile on as background noise whilst working. I glanced up at one point and saw a man wearing a prominent Wildlife Trusts logo. Now whenever the WT's are in the media there's a pretty good chance that it will be cringe-worthy, laughable, just plain wrong or, frequently, all three, so I had to watch the piece. It was about a reserve which was 'behind a locked gate to protect the rare [sic] inhabitants from disturbance'. Oh god, it's going to be bloody Water Voles again I thought. A fair assumption as it is one of the half dozen species that the WT's have heard of. But no, it was Green Sandpipers. the piece proceeded without too much to make me want to vomit (apart from the pathetic reaction of the presenter when made to hold some invertebrates) but the WT's just couldn't help themselves. We were told that the sandpipers had been colour ringed and this showed that there were six birds using the site (not six being seen together you note) and this made it 'THE BEST SITE IN BRITAIN to see these birds'! A quick check of the 2010 Hampshire Bird Report showed 4 sites with numbers up to twice this figure during migration but perhaps the WT's meant in winter? Still doesn't help as 12 were seen at Alresford cress beds in January 2010.

So get yourself down to Alresford soon so that you can see this 'rare' bird at its best site in the known universe.
Posted by Gilbert White's Ghost at 23:55 2 comments:


A new year is time to set some challenges to provide motivation for the year ahead. So what to do this year? I wanted to choose something that was going to be difficult but which improves my natural history knowledge. A couple of years ago a friend tried to see 1000 new species across all taxanomic groups within one year. He was doing pretty well until natural history burn-out occurred in late summer and he ended up falling short. So I'm going to have a crack at that but to make sure that I don't just fall into a year long twitch I'm setting a second challenge of 3000 species in total for the year.

That seemed like enough to keep me out of trouble but just before christmas Andy Musgrove announced the '1000 for 1km' challenge. Basically this is a challenge to see 1000 species across all taxanomic groups within a 1km square. Well it would be rude not to join in so that is challenge number 3 for the year. I'll report most of the 1000for1km results on that blog as that's where all the other participants will be reporting their results.

In order to stand any chance of completing these challenges, I need to tackle groups that I've neglected up till now so I joined the West Weald Fungus Group at their meeting at Witley Common in Surrey on Saturday. We didn't see a vast number of species but most of them were new to me including these large aggregations of Stereum hirsutum on felled Turkey Oaks. 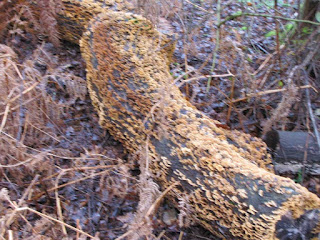 It's good to see the National Trust making an effort to remove this invasive alien species and interesting to see that it is actually useful for something. Another, more interesting, alien on Witley Common is the Pirri-pirri-bur. I've never seen this on the Hampshire heaths but apparently it is quite invasive in Surrey and is becoming a problem on some heaths.

So far this year I've seen 16 new species, mostly fungi but also a couple of plants and a pond skater.
Posted by Gilbert White's Ghost at 02:15 No comments: