........ just long enough to lull me into going down to the New Forest to set up the frass traps and sticky traps that I am using to assess invertebrate populations as part of my Wood Warbler studies. 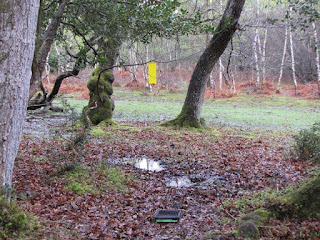 Needless to say, the heavens opened before too long and I got drenched. The volume of rain over the last 48 hours is obvious from the photo below which is of a stream that I can usually jump across. 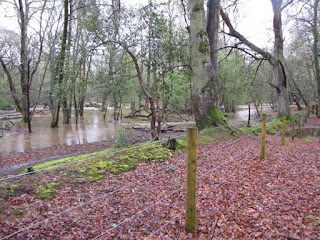 Before the rain got too heavy, I did see four male and one female Wood Warblers. The female was one that I colour ringed last year a couple of kilometres away. Wood Warblers are notorious wanderers and previous colour ringing studies have shown a very low proportion of birds returning to where they have bred before so it is good to get a result so quickly. Apart from the flooding, the severe weather was apparent from the number of freshly fallen or snapped beech in the woods.

Little else to report; fair numbers of Redstarts, my first Cuckoo of the year and the common caddis fly Limnephilus griseus which I've not seen before (but I've only had the key for a few weeks!).

Posted by Gilbert White's Ghost at 00:37 No comments:

Today I visited the new Butterfly Conservation reserve in the Cotswolds. It's hard to assess the quality of a site in rubbish weather at this time of year but it looks like a decent quality limestone grassland which, unlike most new reserve aquisitions, doesn't seem to need urgent restoration management.

A varied assortment of species were seen between and during the showers; Roman Snail, the first I've seen in about 10 years. 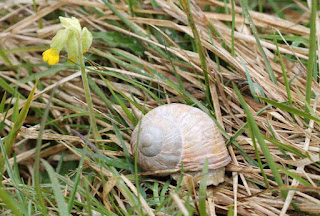 A couple of Micropterix tunbergella were found resting on a beech trunk although only one poor shot was obtained before they flew off. Micropterix species are the most primitive moths and the adults have functional mandibles which they use to feed on pollen. 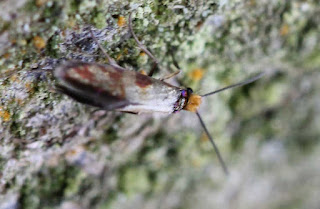 An Adonis Blue larva was a nice find. Apparently, if you put them on the tip of your tongue you can taste the sugary excretions that they use to attract ants. I didn't try! 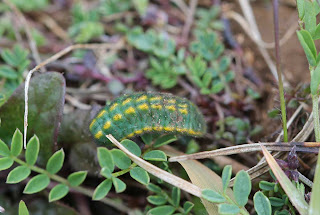 Finally, we found a number of larvae under loose Sycamore bark. Thus far I have failed to put a name to them. Any ideas, do let me know. 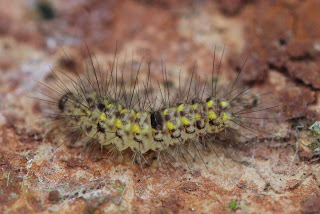 Posted by Gilbert White's Ghost at 00:15 No comments:

Well, the awful weather continues but, while it is a pain for us, it is far worse for the wildlife. I have been involved in a study of Woodlarks for the last few years. They always start nesting early, and generally manage to cope with early spring weather but this year they are really struggling. 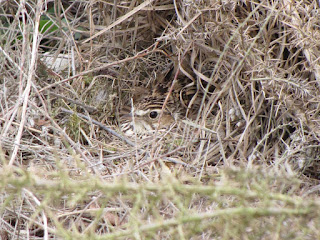 Brood sizes have been small and many nests are losing chicks. The chicks that remain are growing far more slowly than usual and in some cases the whole brood is starving.

Having got fairly depressed with the Woodlarks, I moved on to Stanley Common. As I parked, a Robin appeared carrying food so I watched to see where it was going. A second adult appeared and the first one (obviously the male), fed the female. She then flew into the hole in a birch pictured below. 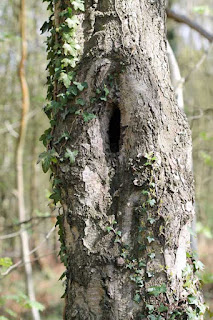 Robins are well known for nesting in a wide variety of situations but this is only the second time I've seen one nesting in a hole in a tree. I continued to watch and after a couple of minutes the male brought more food to the hole. Then a minute later a Blue Tit appeared with nesting material and disappeared into the same hole! It emerged shortly afterwards, minus the material. So it would appear that the Robins and Blue Tits are sharing the same hole.

A walk around the Common produced little of note; a few singing Willow Warblers and a courting pair of Marsh Tits being the highlights. I was however surprised by the number of hoverflies feeding on Common Gorse. Normally all you see on gorse is a few Honey Bees (aka Pollen Pigs) but there were a number of hoverflies of several species on the flowers today, including the Syrphus vitripennis pictured below. 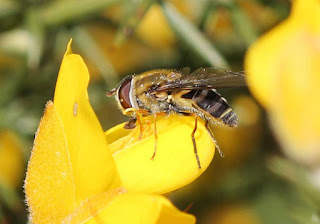 Posted by Gilbert White's Ghost at 02:10 No comments:

Following my first posting, MB (who can always be relied upon to entertain) sent me the following image showing the similarity between Gilbert White and Mrs Slocombe.

I can promise readers that there will be no references to my pussy in this blog! For younger readers who have no idea what I'm going on about, count yourself lucky.

In the spirit of Are you being served, it is perhaps appropriate that I went to have a look at Grandfather's Bottom this morning! This is one of the most stunning landscapes in Hampshire although the photo doesn't do justice to the steepness of the slopes. 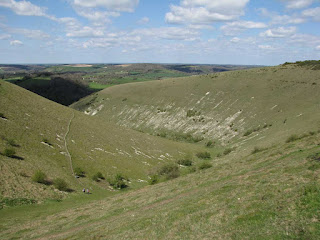 The purpose of my visit was to see if there were any Ring Ouzels around. Luckily the site was not too badly disturbed today and I found a superb male quite quickly. I had about 15 minutes to get some record shots before the first out-of-control dogs flushed it. With more dogs heading my way I decided to head off. The best of my shots is below. 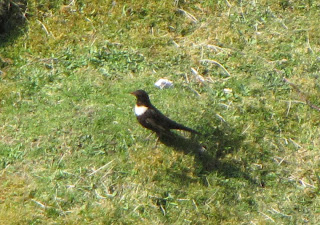 On the way back to the car a Buzzard soared over my head. Having been so scarce in this part of the world for much of my life, I still find it thrilling to get such good views. 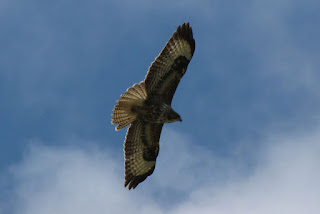 Other species seen included Grizzled Skipper, the attractive pyralid moths Pyrausta nigrata and P. purpuralis and a pill woodlouse whose exact identity will have to wait for another day.

Posted by Gilbert White's Ghost at 22:33 No comments:

I started the morning with a short bird survey on the edge of one of the Surrey heaths. Upon arrival, my first Tree Pipit of the year sang briefly before deciding that the weather was far too grim to bother. Both the pairs of Woodlarks on the site appear to have successfully fledged their first brood and the Stonechat showed that he has got a mate after all. 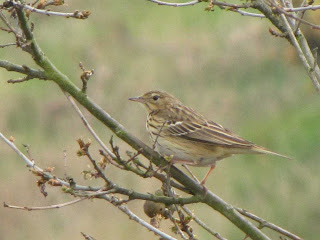 I was getting near the end of the survey when, much to my surprise, a Redstart was singing from a narrow strip of pines, then a second male appeared in front of me. Just to remind me that summer hasn't fully arrived, a flock of about 30 Redpolls were feeding together with a number of Goldfinches and Linnets and at least two Bramblings. Given how scarce Bramblings have been this winter, this was not a species I was expecting.

I then moved to a site in West Sussex which had better remain nameless (the reason should become obvious!). I was looking for the larval feeding signs of the micro-moth Argyresthia glabratella on Norway Spruce and found them eventually, together with some strange slug-like larvae which need further research. All the while, my search was accompanied by singing Firecrests; a species which really is booming these days.

On the way back to my car I noticed a mine in the bark of a sapling oak. Now a couple of years ago, identification would have been east; the micro-moth Ectoedemia atrifrontella. Then someone rather selfishly added E. longicaudella to the British list. This species also mines the bark of young oaks and the mines are inseparable. Most British records are of the mines so we have no idea how common either species is. The only solution is to breed the adult moth and that requires some judicious coppicing. I just happened to have a bow-saw in my car.....!

Posted by Gilbert White's Ghost at 00:04 No comments: