It's not often that I get a whole weekend with no commitments but, partly as a result of the continued awful weather, that was the situation this weekend. So what to do at this time of year? Well I could (and probably should) have spent the weekend staring down a microscope at my backlog of unidentified insects but I'd much sooner get out in the field and there is a plant that is flowering at the moment that I have wanted to see for quite a while. No contest.

The Early Star-of-Bethlehem (aka Radnor Lily - the name that I prefer) Gagea bohemica is only found in Britain at a single site, Stanner Rocks NNR in Radnorshire. I have a particular affection for Radnorshire, having visited many times when a friend worked for the Wildlife Trust there, and have driven past Stanner Rocks on a number of occasions. However, Stanner Rocks is a closed reserve. Normally this would be sufficient encouragement for me to trespass but in this case there are genuine reasons for restricted access as there are a number of rare plants, mosses and lichens which could be damaged by an ill-informed footstep.

Having decided during the week that I wanted to visit to look for the Radnor Lily, the question was whether I could obtain permission and instructions in time. Fortunately I know someone who visited last year so I asked her if she could put me in touch with the right person to ask. This she kindly did, and her contact was immensely helpful, providing lots of detailed information about where and how to find the lily without causing damage as well as lots of other information about interesting species on the reserve.

So I made a 4 am start to avoid the traffic and hopefully get there before the predicted poor weather. This proved to be a good choice as it was already blowing a gale and spitting with rain when I arrived (and the weather as I drove home was atrocious).

There are only two flowering Radnor Lilies in the accessible part of the reserve this year. One was very easy to find due to the directions provided and the fact that it was in a cage. 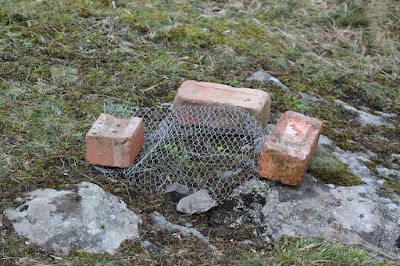 I was told that I could remove the cage to photograph the plant as long as I put it back afterwards. As predicted, it was a little past its best. 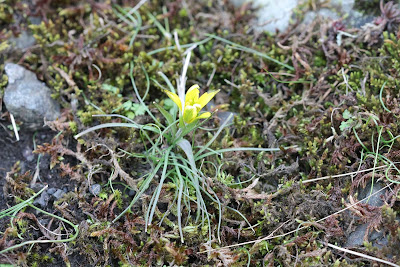 The other plant which was only found earlier this week was predicted to be in better condition so I was quite keen to see it. However it was in a more sensitive area and despite being provided with a photograph of the location with a big arrow pointing to where to look, I couldn't quite tie up the photograph with what I could see in front of me and I didn't want to go bumbling around the rocks causing all sorts of damage. Eventually I decided to have a quick, careful look and immediately stumbled upon the plant (not literally!). The flower wasn't fully open, perhaps due to the weather, but it complemented the first one nicely. 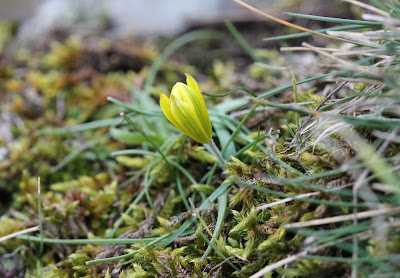 Most of the interesting species at Stanner Rocks at this time of year are lower plants and I was left feeling frustrated by my incompetence in this area. I did find what I believe to be the rare liverwort Riccia beyrichiana however. 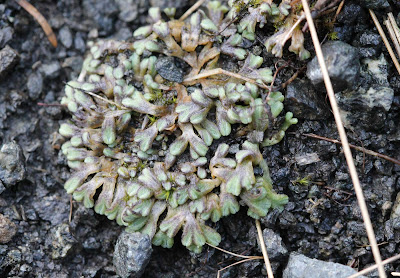 A huge thank you to Megan and Andy for facilitating my visit and providing invaluable information.
Posted by Gilbert White's Ghost at 23:22 No comments: