The advantage of being a rank amateur

It's been a while since my last posting as I've been really busy trying to catch up with things that need doing before the end of summer. What little free time I've had has been better spent in the field than at a computer so there's a lot to catch up on.

In late August I found out that the scarce Oak-leaved Goosefoot had been found growing in silt where water collects on the access road to my office. Goosefoot identification has been driving me nuts this autumn but this one is relatively straightforward. 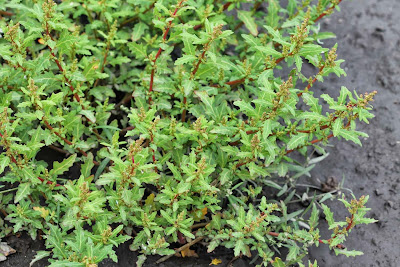 On 29th August I spent the day with one of Britain's top pan-species listers, twitching various plants and moths in Sussex and Hampshire. We started off on Thorney Island where the grass Spartina patens has its only UK site. It was discovered in 2005 but not identified until more recently and searches elsewhere have been unsuccessful. It's a long trudge to the site but the directions we had were very good and we found the patch relatively easily. 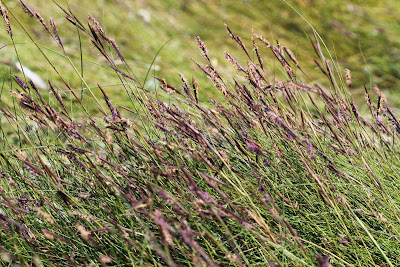 We then went to Sandy Point on Hayling Island to search for Sea Knotgrass which fortunately has survived the extensive sea defence work being carried out there at the moment. Following this we went to the Sinah end of Hayling, with no particular targets in mind but it's a good area and you never know what you'll find when you're with someone else with different skills and knowledge. We both picked up a few new species and were returning to the car when we spotted a stork's-bill that was covered in sand particles, indicating that it was very sticky. But was it actually Sticky Stork's-bill or the very similar Common Stork's-bill? It certainly seemed to fit Sticky but the key features on the fruit really needed a microscope so we both took a fruit for further examination. 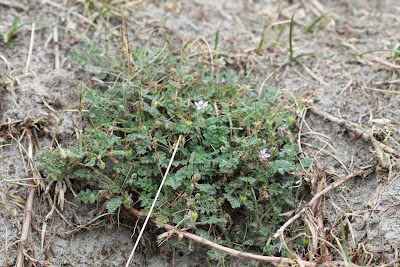 It still looked good under the microscope but a check of the Hampshire Flora cast severe doubts: 'A record from South Hayling is not supported by a specimen and cannot be confirmed. Plants seen recently at this locality are glandular forms of [Common Stork's-bill]...'. Still, I sent a photo of the fruit to the County Recorder who asked me to return and get a specimen. This has now been done and he recently told me that he was convinced that it was Sticky but had sent the specimen to the national referee for final confirmation.

So how has a rank amateur botanist managed to get the first confirmed Hampshire record of a plant at a site that is well frequented by competent botanists? Well, I suspect that not having a clue what you're doing can have advantages, you have to look carefully at everything whereas the more competent would probably look at the plant from a distance and just assume it's the common species.

The rest of the day was less productive. We failed to find the rare micro-moth Trifurcula beirnei at one of its two British sites (although we were a bit early) and moth trapping at Pagham Harbour produced three new species for my friend but none for me. My highlight was a pristine Marbled Green which I see very infrequently. We did find what we believe to be a rare grass near the beirnei site but the County Recorder wants to see a specimen to confirm so more on that hopefully this weekend.
Posted by Gilbert White's Ghost at 02:10 No comments: