I rarely feature invertebrates on this blog apart from fairly big stuff that can be identified in the field. Part of the reason for this is that my microscope camera (which it took two years to get the supplier to send me all the bits to make it work!) doesn't work with Windows 8.

Last week a friend recommended the Eyecam, sold by Brunel Microscopes. At under £60, I decided to take the plunge and ordered one on Wednesday evening. It arrived first thing on Friday which was a nice contrast with the previous company. I haven't had the time (or inclination) to read the instructions yet but just using the basic settings I took the following image of this hopper.

This was swept from a fairly nondescript area of damp heathland in the New Forest in August and I was able to get the identity confirmed at the BENHS hoppers workshop on Saturday. The rather aged key to hoppers doesn't suggest that it is anything special, describing it as local, but the national recording scheme organiser tells me that he only aware of three other records since 1980 and considers it the most declined hopper species in the country.
Posted by Gilbert White's Ghost at 22:50 No comments:

I joined a Flora Group meeting in Portsmouth which was aimed mainly at recording alien escapes but we started off with a scarce native; Slender Hare's-ear Bupleurum tenuissimum. This is an umbellifer but it doesn't look at all like one, at least superficially. According to my records I have seen this species before but I have no recollection of doing so.

Next was a species that is normally thought to be introduced, except in west Cornwall; Bermuda-grass Cynodon dactylon. However, expert opinion is that it is also native on the Isle of Wight and that this Portsmouth colony could also be native.

A slight diversion was made to the world of lower plants when we were shown the Golden-eye Lichen Teloschistes chrysophthalmus. This was a mega-rarity, having not been seen in the area for over 100 years but it now appears to be spreading rapidly on the coast of central southern England. It has also been spreading in Brittany. Presumably it has recolonised from the continent but the fact that it has reappeared in the same area that it was known from in the 19th century is interesting, could it have hung on in Britain unnoticed for all that time?

On the same bush was a lichen that I had not seen before; Physcia stellaris. This appears to be quite scarce in southern and eastern England but is fairly common elsewhere.

A brief lesson in bramble identification produced a new species for me in the form of Rubus tuberculatus. One member of the Flora Group is working on a web site for identifying brambles which will hopefully make them more accessible in due course.

We then reverted to looking at alien plants. This provided me with a number of new species such as Grape-vine Vitis vinifera and Chinese Mugwort Artemisia verlotiorum but I cannot say that such ticks give me much satisfaction.

Posted by Gilbert White's Ghost at 01:30 No comments:

Aliens on the island

A friend wanted to see the stick insect Bacillus rossius which occurs on Hayling Island so I arranged to show him where I had seen it in previous years. He couldn't make it till lunchtime so in the morning I went to the east coast of the island. I wanted to look for Dwarf Eelgrass Zostera noltei which I have not seen before. The usual traffic chaos held me up and the tide was rising rapidly when I arrived but I had a fairly precise grid reference so I was able to find the plant quite quickly - a good thing as another 15 minutes or so and it would have been in water over wellie depth. 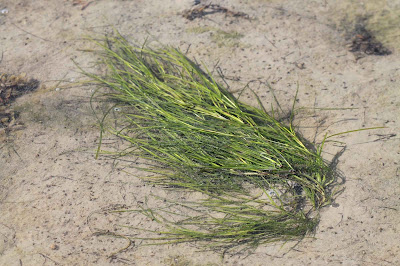 Another thing that I wanted to do whilst at this site was to look for the larval cases of Coleophora aestuariella and C. deviella on Annual Sea-blite. A friend and I found both these species new to Hampshire back in 1996 but I have never been back to look for them since. I found C. aestuariella quite quickly but a search throughout the area of our original find produced no deviella cases. By coincidence, the friend with whom I made the original find, also visited the site a couple of days later and had the same results. It is of some concern that neither of us could refind deviella but it was much scarcer than aestuariella in 1996 and it is to be hoped that it can be refound in future years.

I went off to meet my friend but he was running late so I had a look for the alien escape Cock's-eggs Salpichroa origanifolia which is well known in the area. I saw a likely looking patch of plants and headed towards it but before I got there I almost trod on another garden escape which I had not seen before; Pink-sorrel Oxalis articulata.

My friend had now arrived and we spent some time searching the bramble patches around the beach huts for the stick insect. Sadly there were none to be found, with a few Knot Grass Acronicta rumicis larvae being the only herbivores seen.

We moved to Sandy Point where I was able to show my friend the scarce Sea Knotgrass Polygonum maritimum.
Despite having been in this area on numerous occasions, I had never previously noticed that there was a Monterey Cypress Cupressus macrocarpa sapling just a few metres away. Having found one, we then proceeded to find several more. It's amazing how blind you can be.

Finally we walked down to Black Point where we found several Spanish Broom Spartium junceum bushes, another alien plant that I have not seen previously.

Posted by Gilbert White's Ghost at 00:54 No comments:

Back in late September I collected some Horse Chestnut leaves which contained lots of mines created by the micro-moth Cameraria ohridella. The aim was to see what parasites emerged from the mines so I placed the leaves in a clear plastic bag. The first thing to appear in the bag was not a parasite but I had no idea what it was. In retrospect I really should have known, or at least been able to work it out, but sometimes neither brain cell is working and after searching the internet for some time I resorted to posting an image in the Pan-species Listing Facebook group, asking if anyone knew what this strange thing with an earwig's bum stuck on it's face was. 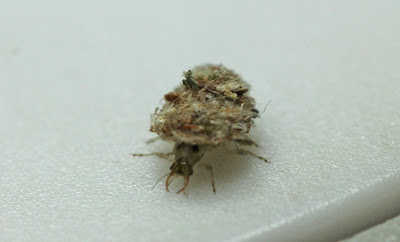 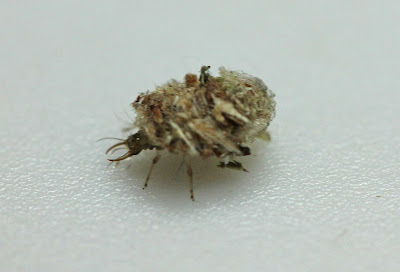 From the flood of responses it was clear that everybody apart from me knew that it was a lacewing larva. One correspondent stated that it was one of the brown lacewings as the green ones don't have the assorted detritus on their back.

The following day I went to look for a new plant for me, and this time I could identify it. There were a number of Henbane plants growing in a game cover strip in an arable field near Up Marden. I managed to squeeze records from two tetrads.

At the weekend I went out with a local fungus group to Witley Common in Surrey. It was by far the most productive fungus meeting I have been to and there was really too much going on to keep up with all the finds but I did manage to see a number of new species, a couple of which were the Redspored Dapperling Melanophyllum haematospermum with it's characteristic reddish gills 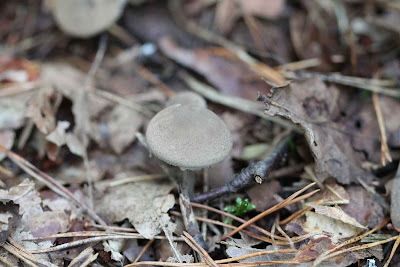 and the Stinking Earthfan Thelephora palmata which reputedly has a 'repulsive smell of putrid garlic'. After my experience with Stinking Goosefoot earlier this year, I decided not to test this description.

On the way home I stopped in at a heath in north Hampshire to look for the St Dabeoc's Heath Daboecia cantabrica. As a native in the British Isles it is only known from two counties in southern Ireland but it is occasionally found as an escape / introduction in southern England. Although it was only recently discovered at this site, I suspect that it may have originally got there during the second world war when there was considerable military activity on the site, with much planting of alien species around buildings, etc.

Posted by Gilbert White's Ghost at 00:06 No comments: