On the Saturday we spent a couple of hours at Goredale Beck, ostensibly to look for a rare stonefly under stones around calcareous seepages. None were found, probably due to the continued foul weather. The highlight for me was finding the tiny soldierfly Oxycera pygmaea under a stone. This species is associated with calcareous springs so the habitat was right but under a stone is the last place I would look for a soldierfly. Presumably it thought about the same of the weather as I did.

There were few plants flowering which was rather disappointing, perhaps the hot weather earlier in the summer had pushed things through quickly. I did manage to pick up a few new species:

Not new for me but I haven't seen it for many years and had to look up what it was as I had no idea initially:
The flower in the background of the photo above was a particular highlight though. I had written off any chances of seeing Bird's-eye Primrose as the books say it flowers in May and June and the fact that most flowers seemed to have gone over didn't increase my expectations but there were loads of them. No idea why this species should buck the trend, maybe the books are wrong, not that I'm complaining on this occasion.

The roadside verges in the area had frequent clumps of Giant Bellflower.

Finally, a mystery object. Anyone got any ideas what this is? 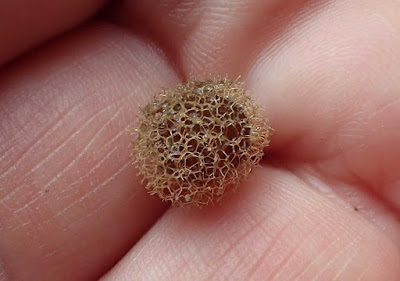