Last weekend I attended Butterfly Conservation's 7th International Symposium at Southampton University. I'm not a great fan of conferences. I find that most lectures are poorly presented or have little new to say (or both). BC's symposium has parallel sessions for most of the three days so you can pick and choose the presentations that mots interest you. Of those that I attended, a couple were dire (I'll resist the temptation to say which), most were ok - moderately interesting and one was outstanding.

The outstanding one was by Louise Mair of the University of York and was entitled 'Abundance changes and habitat availability drive species' responses to climate change'. I would normally avoid lectures about climate change like the plague, not because I don't believe it is happening but because all you ever hear is the bleedin' obvious! But there was a lecture on the effects of nitrogen deposition on the Wall Brown during the same session so I stuck it out.

Louise had used data from the various butterfly atlases to look at distribution changes and from the UK Butterfly Monitoring Scheme to look at abundance changes, so if you have ever submitted records for one of the atlases or done a transect you have contributed to her work. She found that butterflies ability to extend their range northwards was related to habitat availability (bleedin' obvious you might say, but wait...) when the source populations were stable or increasing but when the source populations were in decline, as they were in most cases between the late '90's and late '00's, habitat availability was irrelevant. So, to quote the abstract from one of her papers 'This suggests that stable (or positive) abundance trends are a prerequisite for range expansion.' She pointed out that most climate change research focussed on the availability of suitable habitat for species to colonise and ignored the health or otherwise of the source populations. I understand that her papers have a very high citation index and have clearly had an impact within the scientific community but I suspect that her work remains entirely unknown within the conservation sector.

This is important because I think that her work has implications well beyond climate change. No-one can have failed to notice that these days nature reserves are out of favour. Everything is about 'landscape scale conservation' (LSC). Now I don't have a problem with LSC as a concept. Clearly it would be a good thing if you could increase the amount of suitable habitat for species to colonise but my problem is with the apparent attitude that it is the only thing that matters. When LSC was first being promoted, the main justification seemed to be 'we've been managing small nature reserves for x years and still species are declining so we need to do things on a much larger scale'. That would be all well and good if the nature reserves were being well managed. I remember a new Conservation Officer being appointed to a County Wildlife Trust (before everyone had pompous titles!) and saying that that Trusts' reserves were 'the worst managed pieces of land in [that county]'. What's changed? If anything, nature reserve management has got considerably worse in the intervening years. I'm sure you can all come up with numerous examples of mis-management of nature reserves. So what are the implications of Louise Mair's findings in this respect? If you don't manage your nature reserves properly and get strong, stable or increasing populations, you can do whatever you want in the surrounding landscape and species will still not colonise those areas. Bleedin' obvious? Maybe, but if it is, it seems to have by-passed the conservation movement in Britain at the moment.
I hope that Louise will get funding to continue her research (she's welcome to have the data from my recording scheme to analyse) and that she will promote her work to the conservation movement as well as the scientific community. How about an article in British Wildlife Louise?
Posted by Gilbert White's Ghost at 11:06 No comments:

I've decided to adopt one of the reserves that I used to manage and carry out as much surveying there as I can find the time to do. It's nice to have something to focus on but as the owners are now planning to start grazing the site and have no resources (or inclination) to carry out baseline surveys, it will hopefully also be of some use.

I spent a few hours there on Saturday in gorgeous sunshine. The first hour or so was pleasant enough and produced a few inverts that will probably be new to the site when I get round to identifying them. I walked through the woodland alongside the stream and came across a patch of Moschatel which I'd not seen there before, although it is on the site list. I heard some distant drumming which sounded like Lesser Spotted Woodpecker so headed over to the area and after a while got good views. There have been a few records from the site over the years but always outside the breeding season. I spent some time watching it, wondering whether it had a mate when suddenly another starts drumming a short distance away. For the next few minutes they drummed and called at each other until the second bird seemed to move away.

The next day my brother went to see them and got this cracking photo and also saw the first male apparently excavating a nest hole about 45ft up in a willow. 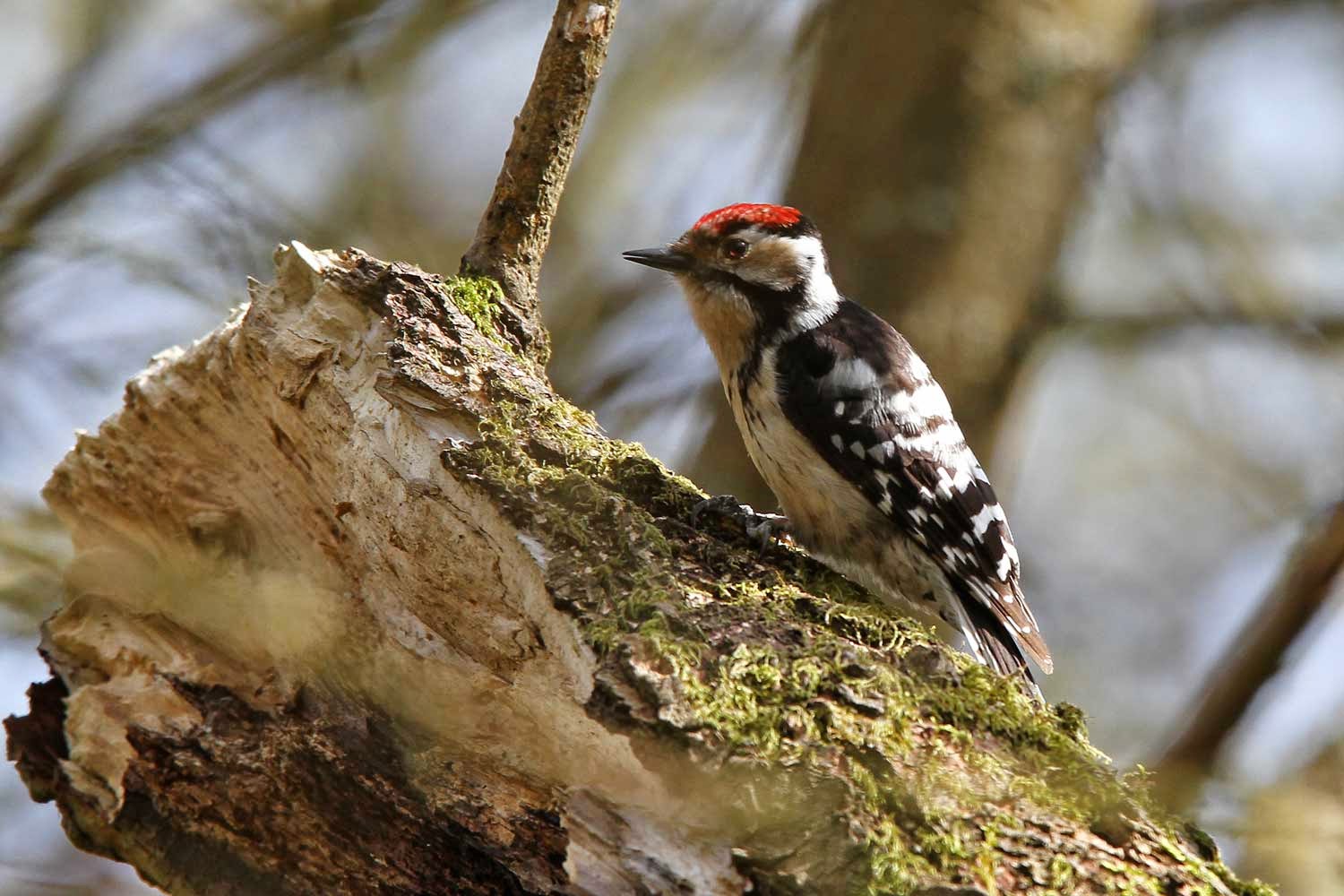 I wanted to find some flowering sallow as it is always excellent for invertebrates. Although the sallow is flowering elsewhere, this site is always quite cool and it took quite a while before I found a couple of small trees in flower. Over the next hour I saw Peacocks, Commas, a Red Admiral, six species of hoverfly and a couple of solitary bees. Not quite as active as I'd expected but I expect it'll be better in a week or so.

Wandering back I came across the impressive cranefly Tipula vittata which seems to be quite common this spring. 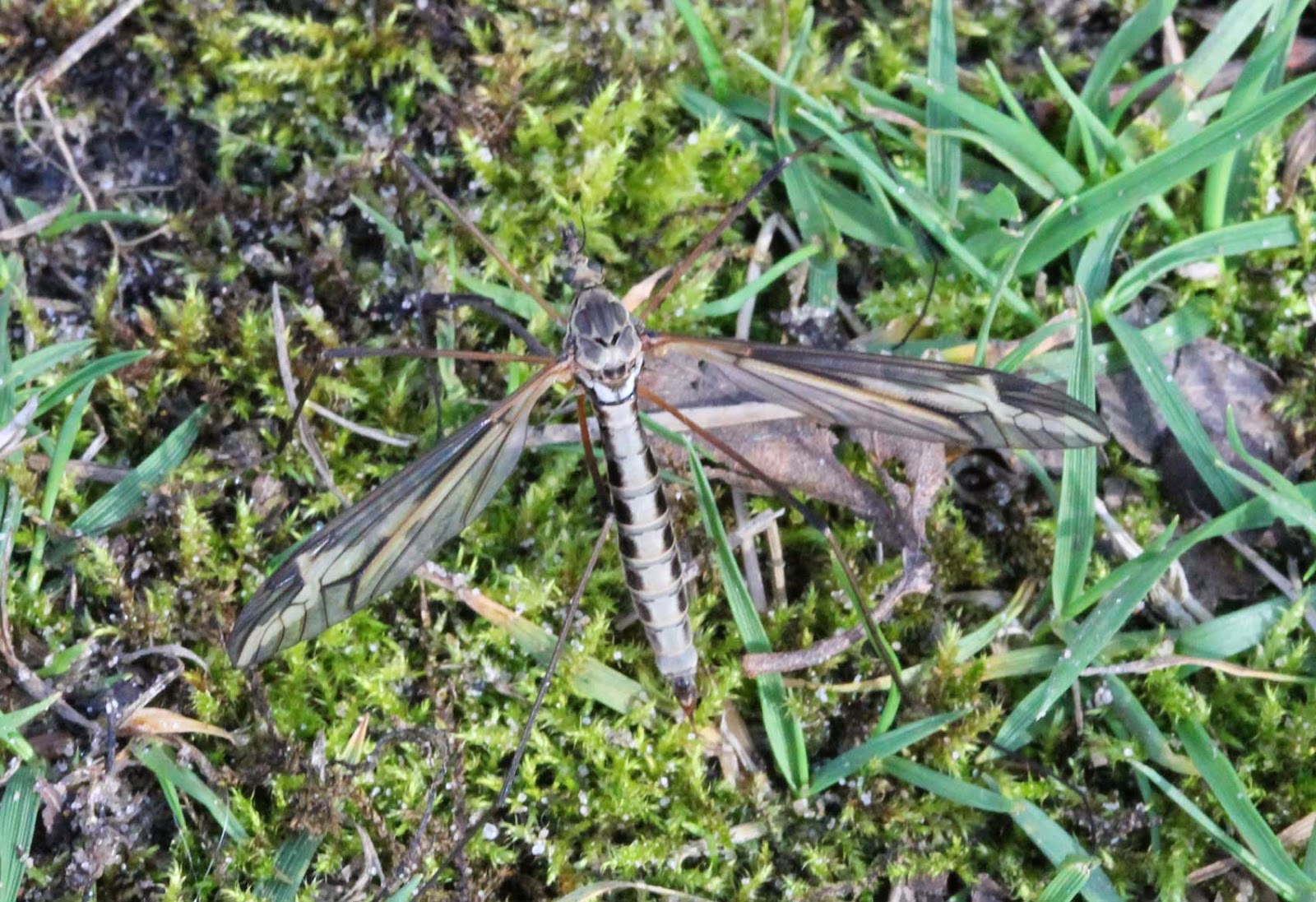 Further up the track I noticed a Nomada bee patrolling the path edge. I really like Nomadas although they can be quite tricky to identify. They are cleptoparasites of solitary bees which can help with identification if you can find the host. 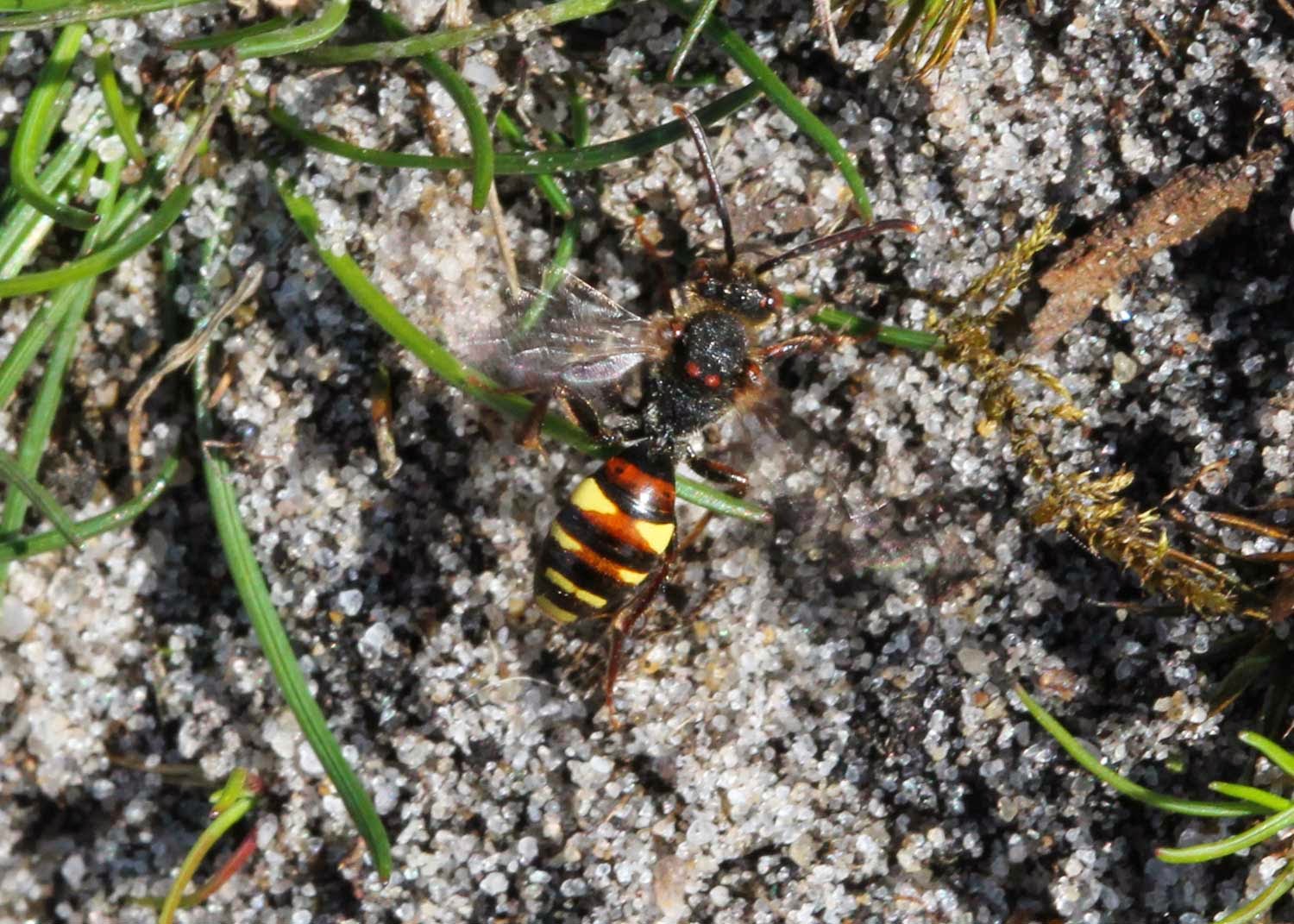 This one keyed out as Nomada leucophthalma although there was one discrepancy with the supposed features. It was hanging about round the nest holes of Andrena clarkella which is a known host so I'm fairly confident of the ID.

Whilst trying to photograph the Nomada my attention was drawn to a small ant-like creature scurrying through the sparse vegetation. Closer examination revealed that it was actually a spider. I know nothing about spiders but I reckon this one is Steatoda phalerata which is apparently quite scarce. The habitat fits and it is said to be ant-like but I've sent the photo to a friend who knows what he's talking about when it comes to spiders, in case there are lookalikes. 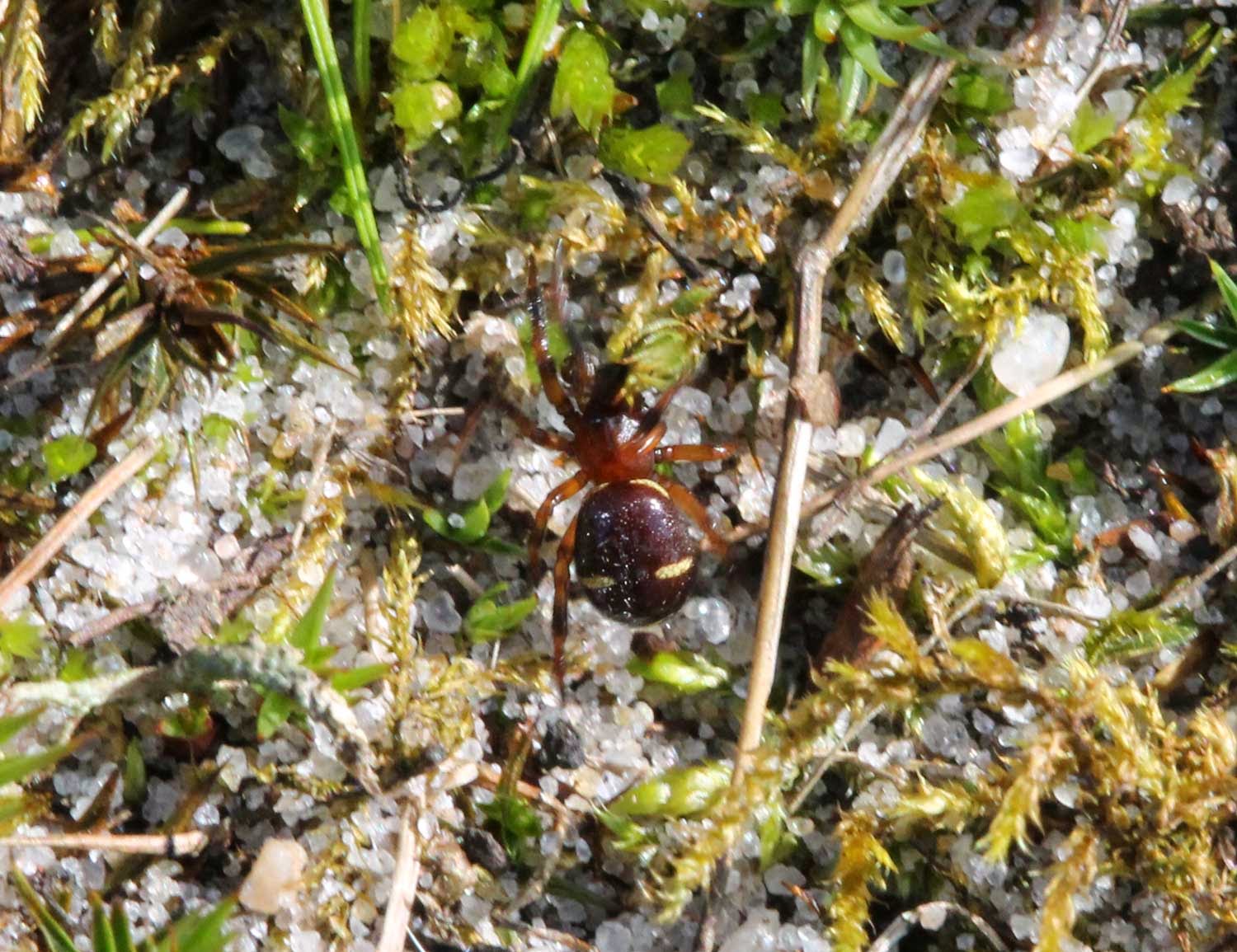 Posted by Gilbert White's Ghost at 22:45 No comments: