I take a break from the fly/beetle challenge to post something about sponge flies because there seems to be very little about them on the web and the British key is a little misleading. Hopefully this blog might save someone a bit of time in the future.

For the uninitiated, sponge flies are no more flies than butterflies are. They have four wings and therefore cannot be Diptera (although much of the information about them on the web seems to be on Diptera.info). They are actually Neuroptera - lacewings. There are only three British species so how hard can it be?

The most recent British key is the lacewings AIDGAP key. It illustrates the male genitalia so there shouldn't be any difficulty with males. Unfortunately I had a female. The key starts by separating out the rare Sisyra terminalis on the basis of both sexes with ends of the antennae distinctly pale, as opposed to both sexes with antennae dark for their entire length. 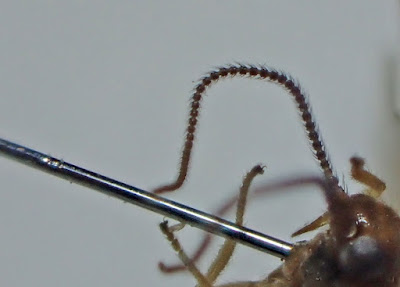 Ok, so it's a fairly rubbish photo but you can see that the ends of the antenna are distinctly paler. Bloody hell, I've got terminalis! Apart from its rarity, the main problem with this as a determination are that it 'appears to favour streams that are overhung with trees' when I caught it by a large lake. But it does say 'appears' so maybe that isn't a problem. I am uneasy though about how distinctly pale does 'distinctly pale' have to be. The out of print RES key is a bit more precise; Antennae blackish with the apical fourth pale yellow; wings grey, almost colourless, cross-veins pale. Well my specimen certainly doesn't seem to have pale yellow tips to the antennae and a quick Google image search produced images that had much paler tips to the antennae than mine. BUT, these were live insects, how much does the colour change on two year old dead specimens? My specimen still cannot be said to have antennae 'blackish throughout' which is the alternative in the RES key.

I then came across a Spanish key. The Spanish fauna only includes one of the three British species, S. dalii. This key also starts with antennal colour but 'antennae of similar colour and tone' does NOT lead to S. dalii, instead that comes out if you follow 'antennae of different colours or tones'. So that opens up the possibility that my specimen is one of the other British species. The AIDGAP key separates these on 'forewings uniformly coloured, the cross-veins scarcely darker than the membrane' versus 'forewing not uniformly brown, membrane lighter than many of the veins and with small but distinct darker marks, at least around the cross-veins'. The RES key words it slightly better but has the same criteria. 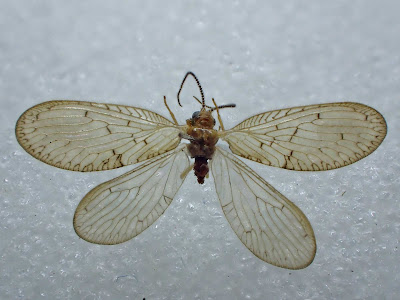 My specimen clearly has darkening of the cross-veins and also the area where the anal vein meets the hind edge of the forewing so my specimen is Sisyra dalii. However the AIDGAP key says that this is extremely local and scarce, with most records from rock-strewn, fast flowing upland rivers (although it is also recorded from the slower and calcareous River Mole in Surrey). This description hardly fits with a lowland lake on clay in West Sussex but the RES key says that all three species are found in similar situations; 'frequents the sides of streams and less often ponds'.

Finally I include a picture of the female terminalia as there don't seem to be any images on the web. I have no idea if they provide any help with identification but at some stage I'll dig out my specimens of S. fuscata and see if they look any different. 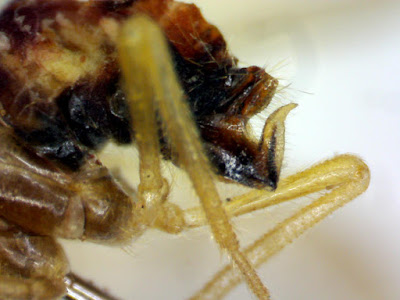 Posted by Gilbert White's Ghost at 00:57