Today I saw a mythical fish. Why mythical? Well everyone else claims that it is common in the New Forest streams and report it on an almost daily basis at this time of year. Having failed repeatedly to see it, I came to the conclusion that this was nothing to do with my incompetence but was in fact due to a conspiracy to wind me up and that the fish in question did not actually exist. The evidence for this mounted last spring, 10 figure grid references were followed up without success and the final proof was that whenever I was with people who claimed to see it all the time, they couldn't find any. I'm not going to fall for this one guys, it is quite clearly is a figment of your imagination.

Now I finally have to accept that it is real. So what are we talking about? The Brook Lamprey Lampetra planeri. 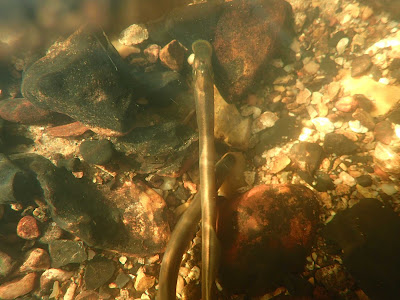 They use the amazing suckers on their mouths to move small pebbles around to make their nest site. 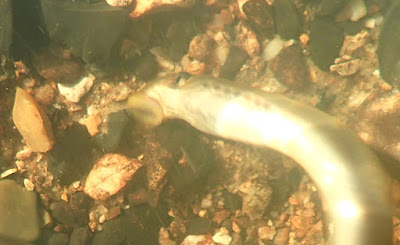 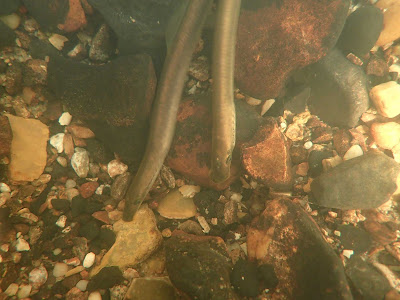 There were only two fish making this nest, often there are more and they will cooperate to move larger stones.

Many thanks to Rich for finally proving that these fish do actually exist.

The other highlight of today was that there were the first three Wood Warblers back in the Forest. The obsession resumes.
Posted by Gilbert White's Ghost at 22:24