Wednesday dawned cold but vastly improved on the previous day. We planned on a quick look at Uig bay before I dragged Seth kicking and screaming out of his beloved 1km square to explore a bit more of the island. The tide was quite high in the bay but Seth's intimate knowledge of the site soon produced some new species for me. It has to be said that some were more impressive than others. I thought we had plumbed the depths with the miniature full stop on Egg Wrack that he had shown me on the first evening (apparently a fungus called Stigmidium ascophylli - see this photo and be truly amazed). Today though he surpassed himself.

It's a rock right? Well have a closer look. 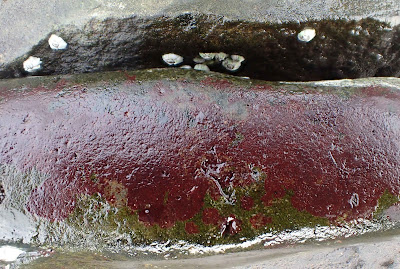 Still a rock. But a rock with some reddish stuff on it. This is a marine alga called Hildebrandia rubra. I bet you're impressed.

I've seen the centipede Strigamia maritima a few times before, it is fairly common on beaches around the UK but I usually see the odd one or two and the numbers on Uig beach are astonishing. These were just a sample from under one rock. 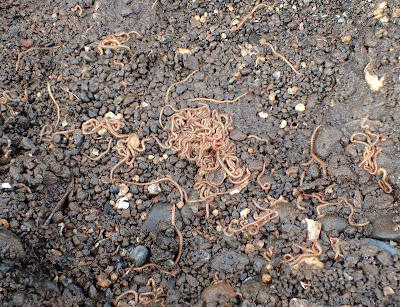 Another species that was in unusually high numbers was the Beadlet Anemone Actinia equina. 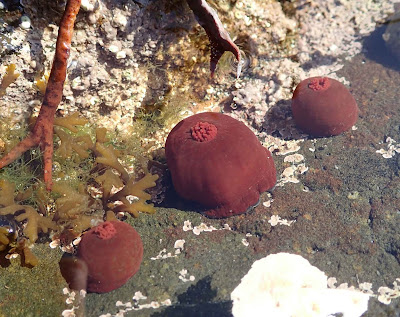 We left Uig and headed south. Seth got very excited about a possible Mute Swan on a small loch which, much to his disappointment, turned out to be a Whooper. It's a weird place Skye, I think if I'd found a Coot I'd have been in danger of being kissed. We ended up in Dunvegan Woods. A strange place and the first section we walked round was uniformly dense, dark conifers; not a ride to be found anywhere. Seth tried to show me a weevil that you can find under dead bark on fallen conifers but the only one he found was dead. He questioned whether it was really dead as 'they can play dead really well' but was convinced when I showed him that it's head had fallen off.

Perhaps the most interesting find in the woods for me was the fungus Phytophthora ramorum. 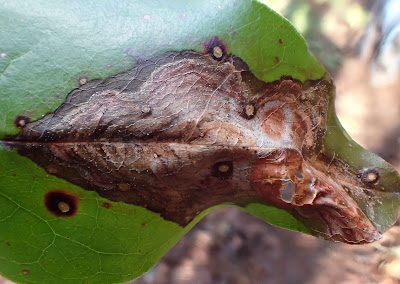 This is known as Sudden Oak Death in the US where it is responsible for the death of millions of oaks. It was first found in plant nurseries in Scotland in 2002 and in the wild in 2007. There was the usual hype in the British media about how it was going to wipe out all our oaks but it seems that the native oaks in Britain are immune. It does infect a range of woody plants and in Britain its most serious impact has been on larch, resulting in the clear-felling of many larch plantations before the value of the timber is lost. Rhododendron is a major host of Phytophthora and this has caused the Forestry Commission to make attempts to eradicate this pernicious weed which has caused so much damage to the wildlife value of many woodlands, especially in western Scotland. It is of course possible that Phytophthora might start to infect other tree species but on the basis of its effects so far - the clearance of non-native conifer plantations and Rhododendron - it is a disease which I welcome with open arms.
Posted by Gilbert White's Ghost at 22:28