The supposed heatwave has so far produced more in the way of rain than anything approaching summer but the sun did show itself for one afternoon so I headed up to Stanley Common to see what was around.

The total absence of worthwhile nectar meant that insects were thin on the ground, and in the air for that matter. Everything I netted in flight seemed to be a Staphylinid beetle so was promptly released. Life is too short.

I did get a few new species for the year. Gymnocheta viridis is a parasitic fly whose larvae feed in the larvae of Noctuid moths.

A Striped Ladybird Myzia oblongoguttata was beaten from pine foliage.

An Orange Underwing moth Archiearis parthenias whizzed past and a Psychid moth Taleporia tubulosa was hauling it's case up an oak trunk.

My first Willow Warbler was singing in the birch but after a while switched to a very wonky version of Chiffchaff. Before anyone gets over-excited it wasn't an Iberian Chiffchaff, just a Willow Warbler with an identity problem.

The highlight of the last few days however was the emergence of Glyphipterix haworthana from the cottongrass seed heads that I collected on Skye a couple of weeks ago. 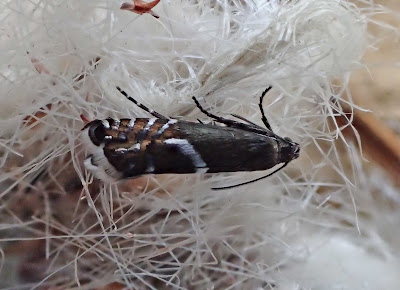 Posted by Gilbert White's Ghost at 22:06